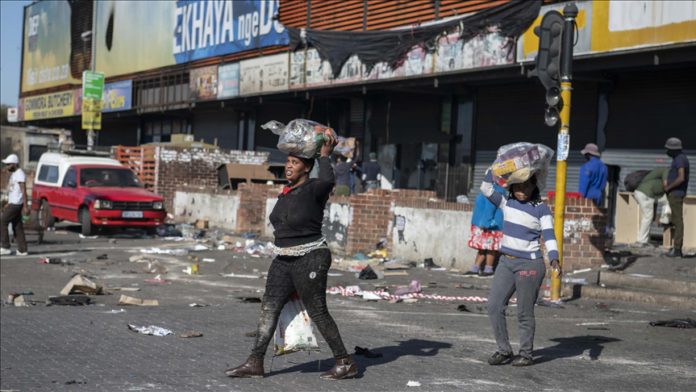 “We have been here since last night to ensure that this mall is not looted,” Mike Mazibuko, a resident of Soweto township, told Anadolu Agency outside Maponya Mall, the only shopping center that has survived the looting so far.

Mazibuko said they are determined to protect the mall, as it is a source of livelihood for many in the area.

“This business employs hundreds. What will happen to them when it’s razed?” he asked. He said people are using the issue of Zuma’s imprisonment as an excuse to commit crimes, loot, and injure others.

In Mayfair, a suburb of Johannesburg, members of the Somali community sent out to trucks to townships and informal settlements to help their nationals there load goods from their stores and take them to places of safety.

“I offered my truck to transport stock from some shops belonging to my brothers because I knew they would be looted,” Mohammed Jele told Anadolu Agency.

Abdikani Hassan, a resident of Pretoria West, said community members have tightened security in their area though it has not yet been looted.

“We’re on the watch for any eventuality. Youths in the area patrol our streets at night to ensure businesses aren’t broken into,” he said via telephone.

In East Rand, mobs of people gathered near Chris Hani Crossing, the mall in Vosloorus, which was looted Monday, waiting to pick at the remains. Armed private security guards waited, ready to retaliate.

Violent riots and looting first broke out in the country last Thursday over the jailing of Zuma for contempt of court.

The protests began in the eastern province of KwaZulu-Natal and later spread to Johannesburg.