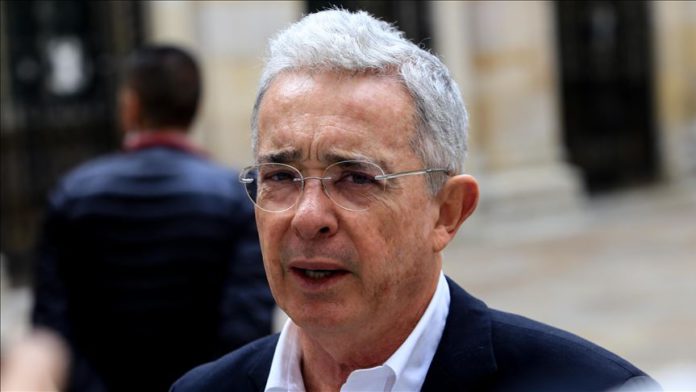 A historic day in Colombia occurred Aug. 4, 2019, when the Supreme Court ordered house arrest for former President and current Senator Alvaro Uribe Valez, the most powerful man in the country in the last two decades.

The judicial process against Uribe started in 2014 when he filed a lawsuit against left-wing senator of the opposition party Polo Democratico, Ivan Cepeda, who had been looking for evidence linking the former president to paramilitary groups.

But the lawsuit turned against Uribe when the Supreme Court decided to launch an investigation against the ex-president and his lawyer for attempting to manipulate witnesses.

The former president denies the accusations and alleges his arrest is the result of a plot hatched by political enemies, among which are, according to Uribe, “members of the extinct FARC [Revolutionary Armed Forces of Colombia] guerrilla and its allies,” an indirect reference to the Venezuelan government. The FARC was a armed guerrilla group fighting the government since the 1960s.

Who is Alvaro Uribe Velez?

Uribe Velez was born in Medellín, the capital of the department of Antioquia, northwest of the country. He was the son of a landowner and rancher Alberto Uribe Sierra, who was assassinated in 1983 by the FARC. The murder was the base of what, in his two presidential governments (2002-2006 and 2006-2010), was known as the Democratic Security policy.

In 1976, Uribe began his career as the Head of Assets of the Public Companies of Medellin, before moving to Secretary General of the Ministry of Labor in 1977 during the administration of President Alfonso Lopez Michelsen.

Between 1980 and 1982, Uribe worked as the director of Colombia’s civil aviation authority, Aerocivil where he signed an agreement with Avianca Airlines that was used for the construction of the Aerial Bridge Terminal in Bogota.

During the period which he led the organization, Uribe was questioned for allegedly giving flight licenses to people related to drug trafficking.

His name became popular in the Antioquia capital when President Belisario Betancourt appointed him as mayor of Medellín.

Although his mandate in the mayor’s office was short, Uribe took advantage of the position to lay the foundations of his political fortress.

After a few years in the Medellin Council, Uribe Velez was elected senator in 1986. In Congress he held a seat until 1994.

In the Senate, he supported initiatives such as Law 71 of 1988, which reformed the pension system, and Law 16 of 1990, which allowed democratically financed Colombian football teams. Semana magazine chose Uribe as the best congressman of 1990.

His parliamentary work and political positions in Medellin served to increase his electorate through which he managed to be elected as governor of Antioquia in 1994.

From this position, Uribe began to form his “strong hand” form of government against the expansion of the FARC in the region.

As governor, he strengthened the department’s education, made a strong investment in infrastructure and promoted the implementation of private security and surveillance cooperatives for agrarian defense, also known as Convivir.

The Convivir was created by President Cesar Gaviria (1990-1994) as a response to the state to provide a new legal framework for landowners and the defense methods that they had been exercising on their own lands.

However, several of the cooperatives served as fronts for the expansion of paramilitary groups in Antioquia and Colombia. In fact, the Bogota’s Justice and Peace Court pointed out that thanks to Convivir, “the paramilitary groups consolidated and expanded their criminal networks and their ties with economic, political, and state sectors.”

During Uribe’s government, Antioquia was the scene of bloody massacres such as the in the villages of El Aro and La Granja, belonging to the Colombian municipality of Ituango in the department of Antioquia.

In October 1997, 150 paramilitaries entered the El Aro and selectively murdered more than 15 peasants.

The former paramilitary commander Salvatore Mancuso stated that a helicopter from the Antioquia government flew above Ituango while the crimes were being committed. Mancuso also said that Uribe had knowledge of it.

In 2015, a ruling by the Court of Justice and Peace of Medellín asked the Indictment Commission of the House of Representatives to investigate Uribe, in his capacity as governor, for the events.

At the same time, the Supreme Court of Justice declared the El Aro massacre a crime against humanity, so the murders could not prescribe and can be investigated at any time.

In 2018, a ruling by the Criminal Chamber of the Superior Court of Medellin requested another process be opened against Uribe for La Granja massacre committed by 30 paramilitaries in June 1996 in which five people were murdered.

In 2001, after the failure of the peace process between the FARC and the outgoing government of Andres Pastrana, Uribe was elected President of Colombia. With 53.1% of the vote, he defeated the candidate of the Liberal Party, Horacio Serpa, in the first round of presidential elections.

His arguments and way of thinking were welcomed by a large part of Colombia that saw in Uribe a redemptive figure.

His political personality served to define an administration that was characterized by strong military offensives against FARC.

The weakening of the guerrilla group was fundamental for the recovery of national and foreign investment. It also served as a starting point for Uribe’s successor, President Juan Manuel, Santos to carry out a peace process that culminated in the demobilization of the FARC in 2016.

In 2003, the Uribe government also carried out negotiations in the Santa Fe de Ralito department of Cordoba to demobilize the United Self-Defense Forces of Colombia (AUC) paramilitary group.

In November 2005, after the approval of the re-election by Congress and the Constitutional Court, Uribe announced his second candidacy for the 2006 presidential elections. He won overwhelmingly with 62.2% of the vote and consolidated a large parliamentary majority.

In his second term, Uribe strengthened the Democratic Security policy and ordered military strategies such as Operation Jaque, in which 15 hostages were rescued from the FARC, among which was former presidential candidate Ingrid Betancourt, three Americans and 11 soldiers.

Despite the good economic and military results, serious human rights violations occurred during Uribe’s mandates, such as the extrajudicial killings of thousands of innocent civilians by the Colombian army, known locally as “false positives”.

According to a report that the General Prosecutor’s Office gave to Colombia’s Special Jurisdiction for Peace (JEP) in August 2018, the number of people killed in ‘false positives’ exceeds 10,000.

In April 2008, congresswoman Yidis Medina asserted she sold her vote in favor of Uribe’s reelection in exchange for financial contributions.

A year later, the Agro Ingreso Seguro (AIS) scandal was revealed, a government program led by former Minister of Agriculture Andres Felipe Arias, which benefited wealthy landowners who did not need state resources.

After finishing his term, Uribe supported the candidacy of Andres Felipe Arias in the Conservative Party consultation and when he lost, he supported his former Defense Minister Juan Manuel Santos, who was elected new president in 2010.

After distancing himself from Santos due to political differences, Uribe led an opposition political movement that was consolidated with the birth of the Centro Democratico political party in 2014.

In 2016, Uribe led the campaign against the peace deal with the FARC, claiming “the dangers that a bad agreement would bring to the country.” His campaign won and forced the partial modification of the agreement between the Santos Government and then FARC guerrillas in Havana, Cuba.

In 2018, Uribe played a fundamental role in the election of Ivan Duque as president. A triumph celebrated by more than 10 million voters.

After the arrest of Uribe was announced, Duque came forward and stated that: “I have always considered him (Uribe) and will consider him a genuine patriot, dedicated to serving Colombia, as evidenced in a long career of public service as director of the Aerocivil, mayor of Medellin, senator, governor and as president of Colombia on two occasions,” he said.

*Juan Felipe Vélez from Bogota contributed to this report