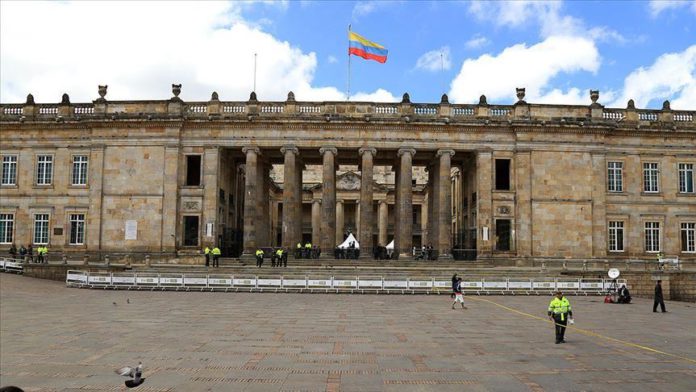 On July 20th, Sandra Ramírez became the first former Revolutionary Armed Forces of Colombia (FARC) guerrilla to occupy leadership in the Colombian Senate. Her designation as second vice-president of the upper chamber, with the support of Government´s opposition parties, is a historical moment for the country.

In an exclusive interview with Anadolu Agency, she said that her position will help her promote the implementation of the Peace Agreement and advocate for women’s rights.

Her birth name is Griselda Lobo Silva, she is 56 years old and she spent nearly two third of her life within the FARC. It was in the armed group, now extinct, that she adopted the name Sandra Ramírez, by which she is best known today.

Colombia and FARC reached a peace deal in November 2016, ending more than 50 years of conflict between the two sides.

The current senator joined the guerrillas in the 1980s from a peasant family with 18 children. Her family is from the region of Velez, in the department of Santander, north-center of Colombia.

She was also part of one of the most representative FARC camps known as ´Casa Verde´, in the municipality of La Uribe, Meta. It was there that she met the founder of the armed group, Manuel Marulanda Velez, better known as ‘Tirofijo’, and became his life partner.

For more than two decades, Ramírez was Marulanda’s companion and right-hand. She says that the legendary commander, one of the most wanted men by the Colombian authorities, died in her arms at the age of 78, after suffering a heart attack.

For the legislator, her designation in one of the leadership positions of the Colombian Congress represents an endorsement of the Senate majority to the Peace Agreement and “a message of solidarity” towards the FARC political party, which faces a difficult scenario with more than 200 ex-combatants killed.

“The designation is representative for the country,” Ramírez told Anadolu Agency. “Especially since we can make visible the necessity for peace, advocate for the implementation of the Havana Agreement and show the many difficulties that have been experienced in this process,” she added.

When former President Juan Manuel Santos began the exploratory phase of the peace process, Ramírez was on the FARC negotiating team. Today, even after the signing of the Peace Agreement, many Colombians still remember the images of Sandra Ramírez with rubber boots and a rifle in her hand.

The designation of the former FARC guerrilla as part of the leadership in the Colombian Senate brings about some responses of rejection by politicians and opinion leaders. Former Deputy Minister of Justice, Rafael Nieto, stated that Ramírez “not only denies recruitment of minors but minimizes rapes inside the FARC.” “Neither repentance, nor justice, nor truth, nor reparation. And then they ask why we don’t believe in that spurious pact,” added Nieto on his official Twitter account.

But there were also voices of support, including one of the former Colombian presidents and current senator Alvaro Uribe, who despite his opposition to the Havana Peace Agreement, congratulated Ramírez on her designation. “I do not agree with the Havana texts, but I greet the Senator Griselda Lobo election as 2nd Vice President of the Senate, (she) discusses with arguments and is consistent,” said Uribe, a right-wing political leader.

The senator said Uribe Velez’s statement shows that there are already people “who are understanding that we can build from the difference and that is very important”. She stressed that the accusations against her, as well as against other former members of the FARC, will be resolved in Colombia’s Special Jurisdiction for Peace (JEP). “We made a commitment and we are keeping it. When the JEP has requested us, we have been there,” said the policymaker.

Ramírez added that her experiences as a combatant prepared her for the leadership position to which she was sworn in on July 20.

“We women in the armed struggle had space, rights, and duties. We didn´t get to occupy high degrees (inside the FARC), but we learned to think about women´s the specific needs, we had a political education, we were required to take care of and protect our territory. This training allows us to take on these new challenges,” said Ramírez.

While the FARC was in arms, no woman was part of the Secretariat, its highest instance. In fact, few women fighters were able to access middle and high leadership positions within the armed group, despite the fact that around 30% of the guerrilla members were women.

Today, the FARC National Political Council, the highest instance of the political party, has four women among its 14 members.

The senator affirms that, now that she has a leadership position in the country, she will promote laws that help women and promote the accomplishment of what was agreed in Havana.

“My fundamental priority will be to work for peace. I am going to work tirelessly for full compliance with the Peace Agreement and for women, as it is contemplated within the agreement: as a transversal issue,” says the legislator.

Ramírez has important challenges ahead. Among the pending issues of what was agreed in Havana is the implementation of comprehensive rural reform and the State’s fight against paramilitary groups. The senator adds that it is necessary to create a “human and comprehensive” security strategy to decrease the levels of violence that are experienced in many regions of Colombia and that have affected ex-combatants.

For the policymaker, the best way to solve the underlying problems of the country is for Colombians to support what was agreed in Havana and bet on peace.

After participating in the armed conflict for more than three decades, knowing Manuel Marulanda closely and being part of the negotiating team in the peace process, Ramírez arrives to the leadership of Congress convinced that arms are not the way.

“We advocate for a political solution to the conflict because the war leaves wounds, suffering, and more victims. We say no and no to war,” she concluded.