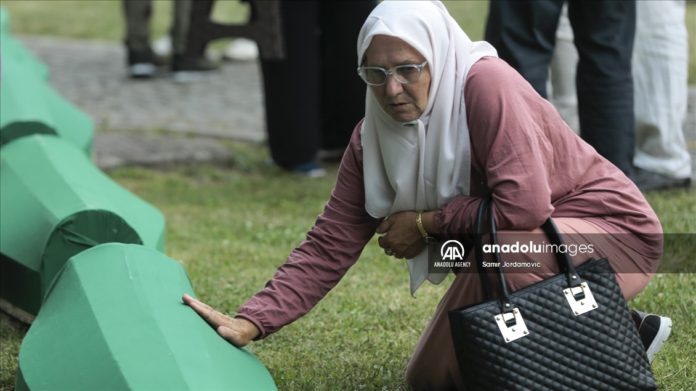 The coffins of 19 victims killed in a genocide in Srebrenica were moved to the Potocari Memorial Cemetery, where they will be buried Sunday.

The victims, who will be buried on the 26th anniversary of the genocide in 1995, in which at least 8,372 Bosniak civilians were brutally killed by Serbian forces, were brought to the cemetery on shoulders from the old battery factory used as a base by UN soldiers during the war

Azmir Osmanovic, who was only 16 when he was killed, is the youngest victim to be buried this year. Husein Kurbasic, the oldest, was 63.

After the funerals, the number of burials at the cemetery will rise to 6,671.

A three-day peace march organized annually on the forest path that was used by civilians fleeing the genocide that started in Srebrenica in eastern Bosnia and Herzegovina on July 11, 1995, trying to reach Tuzla, ended with the participants reaching the Potocari Memorial Cemetery.

Participants of the march, which was held for the seventeenth time this year, prayed for victims at the cemetery.

SREBRENICA, BOSNIA AND HERZEGOVINA – JULY 10: Relatives pray next to the coffins of 19 victims of Srebrenica Genocide ahead of buried at Potocari Memorial Cemetery, on the 26th anniversary of the 1995 genocide in Srebrenica, Bosnia and Herzegovina on July 10, 2021. ( Samır Jordamovıc – Anadolu Agency )

Serb forces were trying to wrest territory from Bosnian Muslims and Croats to form a state.

The UN Security Council declared Srebrenica a “safe area” in the spring of 1993. But troops led by Gen. Mladic overran the UN zone. Mladic was later found guilty of war crimes, crimes against humanity and genocide,

About 15,000 residents of Srebrenica fled to the surrounding mountains but Serb troops hunted down and killed 6,000 more people.

Bodies of victims have been found in 570 different areas across the country.

In 2007, the International Court of Justice at The Hague ruled that genocide had been committed in Srebrenica.

On June 8, UN tribunal judges upheld in a second-instance trial, a verdict sentencing Mladic to life in prison for the genocide, persecution, crimes against humanity, extermination, and other war crimes in Bosnia and Herzegovina.