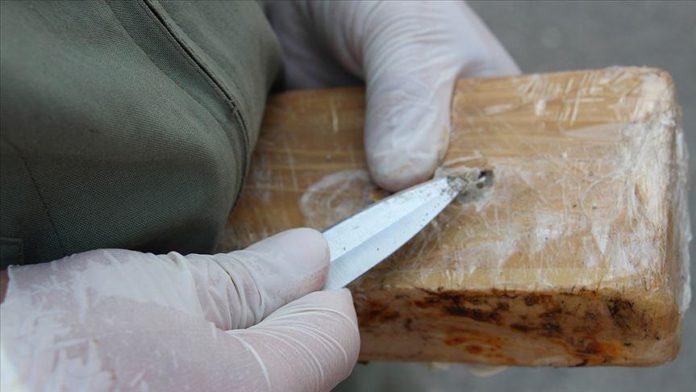 The Gambian anti-narcotic authorities seized nearly three tons of cocaine in the capital Banjul on Friday, the largest arrest in the history of the West African country.

Some 2.9 tons of cocaine stuffed in 118 bags was shipped from the Port of Guayaquil in Ecuador through Algeciras in Spain via Maersk Line Shipping Company, Ousman Saidybah, spokesperson for the Drug Law Enforcement Agency of the Gambia, told Anadolu Agency.

The bags of the shipment disguised as industrial salt arrived in Banjul on Jan. 1. Police arrested Gambian national Sherif Njie whose name was used as the contact person for the shipment.

However, the anti-narcotic agents said the shipment belongs to Banta Keita, a French national of Gambian descent who resides in a Gambian affluent neighborhood of Fajara, some 18 minute-drive from Banjul.

“Sheriff Njie is currently in custody, helping in the investigation while the hunt for Banta Keita continues,” said Saidybah.

The confiscated drug has a street value of $88 million.

The Gambia has been used as a transit route for South American hard drugs bound for Europe and other destinations. Saidybah said their initial findings suggest the shipment is not destined for the Gambia.

“This seizure is yet another confirmation that The Gambia like other West African states continues to be a storage and transit route for cocaine by international organized criminal groups,” he added.

Turkey to launch 5A satellite on Monday night: Official