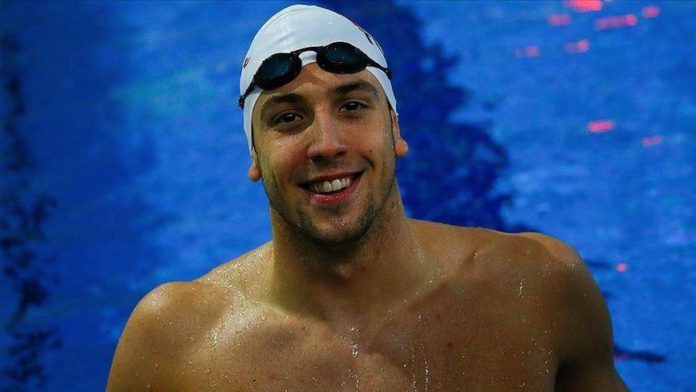 Devotion and passion for any sport are keys to success, Turkish record-holder swimmer Emre Sakci told Anadolu Agency in an exclusive interview.

Sakci, who broke the European records in the men’s 50- and 100-meter breaststroke in November, said if facilities and equipment develop further, the number of athletes will increase and it would lead to greater achievement in Turkey.

He said after returning from Hungary, his Olympic training began with the help of his coach Turker Oktay, whom he has worked with for 10 years.

“We put into practice a special program prepared by Turker. He began to prepare the template that made some technical measurements regarding this program in the summer, and something brand new has come out now,” he said.

“I’m feeling excited to have started implementing this program,” he said. “It will be a good eight months until the Olympics and will have a lot of fun as we can feel this while working,” he added.

Sakci said that he works with discipline during the 24 hours of the day so he trains the entire time, noting he is doing what he loves and cites it for his success.

The athlete-coach relationship is crucial to reaching difficult goals in any discipline, he said.

He said an athlete should never forget that the trainer does not discriminate but the coach likes to train those who want to work.

“If they want to stand out among athletes, it will be enough for them to show their coaches what they do with love and devotion,” he said.

Sakci set European records at the International Swimming League Budapest, finishing the 100-meter breaststroke in 55.74 seconds, and the 50-meter race in 25.29.

He also bagged a silver in the 50-meter breaststroke at the European Short Course Swimming Championships 2019 in Glasgow, Scotland, getting a quota for the 2020 Olympics in Tokyo.

Sakci writes Izmir on his chest in honor of quake victims

The record holder paid tribute to the victims of a deadly earthquake in Izmir, Turkey after his 50-meter race.

A magnitude-6.6 tremor rattled the nation’s third-largest city, killing at least 115 and injuring more than 1,000 victims.

After clinching the win, Sakci made a heart-shaped hand gesture above the word “Izmir” on his chest to show solidarity and support.