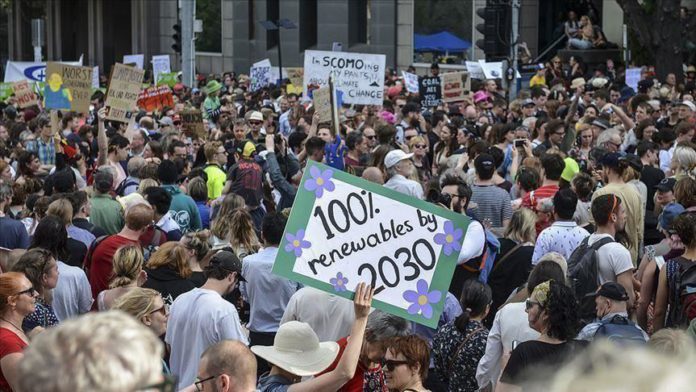 In May, people across the world continued to stage strikes, demonstrations and protests calling for action against climate change and damage to the environment.

They included the Talks for Future webinar series organized by the Fridays for Future movement on Fridays and digital climate strikes that gathered activists around the world online.

– The fifth webinar of the Talks for Future series, organized by the Fridays for Future movement, is held with the participation of Sinan Eden from the Climate Jobs Campaign in Portugal and Hannah Martin from Green New Deal UK on “a just transition for workers” on the occasion of International Workers’ Day.

– Climate activists around the world hold digital campaign online on the first Friday of the month and stressed the “need to divest from fossil fuels and build up jobs in renewable energy” on the occasion of International Workers’ Day.

– Demonstrators from the group called HS2 Rebellion block and shut down HS2 high-speed railway in London and Warwickshire in protest of construction work that continues amid the COVID-19 outbreak.

– Demonstrators gather in the Greek capital, Athens to protest against the government for using the COVID-19 outbreak as a cover to pass an anti-environmental law called Modernized Environmental Legislation which allows private sector to develop projects in protected areas.

– Sixth webinar of the Talks for Future series is held with the participation of Erica Bower, a researcher on climate change and human mobility, and Michael Bakas, an environmental and human rights activist, on the link between the refugee and the climate crises.

– Turkish climate activists Deniz Cevikus on her 59th week and Atlas Sarrafoglu on his ninth week of digital strike stress the importance of forests for a sustainable and livable planet.

– In the second Fridays for Future strike, climate activists and environmental protesters around the world gather online to raise awareness on climate change-related problems.

– On the week 92 of her school strike, Swedish climate activist Greta Thunberg celebrates The International Day for Biological Diversity.

– A group of climate activists in Austria’s capital Vienna stage a physical protest by observing social distancing and with face masks.

– Activists celebrate the first anniversary of the massive second global strike on May 24, 2019 where hundreds of thousands of students from 150 countries went on a strike from school to demand “a safe future for life.”

– Referring to Dehing Patkai Forest, called “the Amazon of the East,” which is in danger of deforestation due to coal mining, child environmental activist Licypriya Kangujam calls on Indian Environment Minister Prakash Javadekar to take action to protect the country’s forests and the environment.

– People around the world participate in an online environmental campaign against deforestation on the occasion of Africa Day.

– Japanese environmental NGOs submit a petition for the cancelation of the Vung Ang 2 coal-fired power generation project in Vietnam to the Japanese public and private sectors.

– On the last Friday of the month, many environmental and climate activists express solidarity with black people over the death of George Floyd, stressing that “climate justice is racial justice.”

– HS2 Rebellion demonstrators stage a protest to highlight the proposed destruction of ancient London Plane trees in a park in front of Euston Station.

WHO must be sufficiently funded, say world's physicians