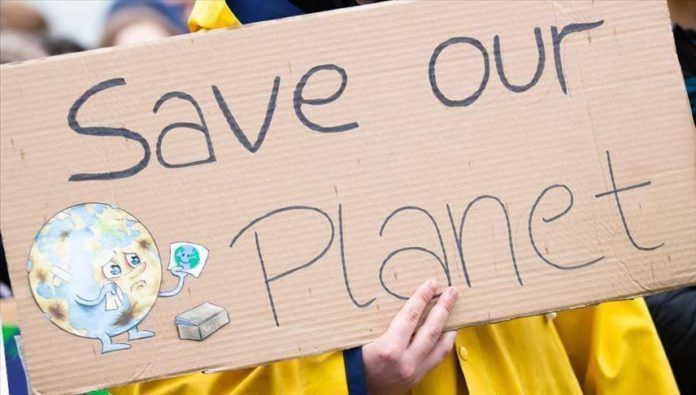 In June, people across the world continued staging strikes, demonstrations and protests calling for action against climate change and damage the environment has been bearing.

They included protests of the Fridays for Future and Save Congo Rainforest movements among other digital climate strikes that gathered activists all around the world online.

– Some 500 protesters in Germany protest the decision of opening a new coal plant in the country which already has announced phasing out coal by 2038.

– Supported by several groups, including ActinAid Bangladesh, a group of women holds demonstration in Satkhira, a district in southwestern Bangladesh, on the occasion of the World Environment Day.

– The first strike of June by Fridays for Future also mark the World Environment Day, and voice support for Black Lives Matter protests and Congo rainforests as well as demonstrations against climate change.

– Extinction Rebellion France movement occupies the construction site of a multi-story car park in the eastern Chambery region to protest a culture of car dependency.

– On the 100th day of Save Congo Rainforest protests, Scottish climate activist Kyle Downie, 20, vowed to continue protesting. “We will keep fighting to #SaveCongoRainforest and #SaveCongoForest_Flora_Fauna!”

– Young Philippine activists take to the streets on the occasion of the country’s Independence Day and stage a protest demanding climate justice.

– Indian environmentalist activists on the second Friday of June hold an online campaign to raise awareness on the Western Ghats mountain range.

– Mentioning the Swedish court’s “green light” for new oil refinery, climate activist Greta Thunberg says on Twitter: “It will make it impossible for Sweden to reach the emission targets in line with the Paris Agreement. End of story.”

– Hungarian climate activist Lili Aschenbrenner, in her 13th digital strike with a banner reading “Defend the Defenders”, shows solidarity with people of Middle East and North Africa over ecological and economical problems across the region.

– Environmental activist Florent Mimart holds solo protest for Kenya’s Nairobi National Park as the park is under threat of urban development, he says.

– Environmental organizations start digital campaign for Lumad indigenous group in the Philippines that are forced out of their lands due to environmental degradation-related activities such as mining.

– Climate strikers and activists around the world hold protests mostly online for the last Fridays for Future demonstration of June.

– Along with two other climate strikers, Patsy Islam-Parsons stage a demonstration in Sydney, Australia to raise concern over the record 38C (100.4F) above the Arctic Circle.

– A group of people, led by Extinction Rebellion movement, stage “die in” protest in Hong Kong to raise awareness for danger of air pollution in the region and the global climate crisis.