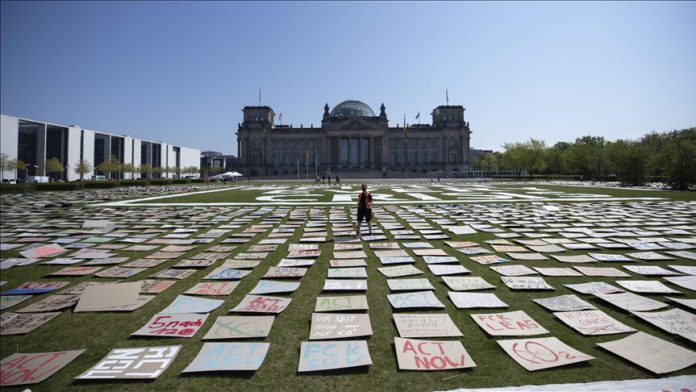 In April, people across the world continued to stage strikes, demonstrations and protests calling for action against climate change and damage to the environment.

Activists and concerned citizens alike continued to hold massive events online, which was started in the last month due to the novel coronavirus outbreak.

They included the Talks for Future webinar series organized by the Fridays for Future movement on Fridays and celebration of the 50th anniversary of Earth Day, which millions of people around the world took part in online in their homes.

In week 85 of her school strike, Swedish climate activist Greta Thunberg shares a message on Twitter: “Act responsible, your actions can be the difference between life and death for others.”

Climate activists from around the world, striking to save the Congo rainforest, gather online to raise their voices for the protection of the rainforest and its flora and fauna.

The Food and Land Use Coalition makes a call to action for world leaders on preventing a global food security crisis while combatting the COVID-19 outbreak.

Many climate strikers and activists around the world join the digital strike following the call by the Fridays for Future movement.

Third webinar of the Talks for Future series, organized by the Fridays for Future movement, is held with the participation of Carlos Manuel, a climate scientist from Palau island, and Jerwin Baure, a marine scientist from the Philippines, on climate change’s impact on island nations.

With his third week of climate strike, Francis Ssembatya, 18-year-old climate activist from Uganda, takes part in the second Friday strike of the month.

More than 2,500 people from different parts of the world attend digital strike, according to Fridays for Future.

Edgar McGregor, 19, completes his one year of weekly climate strike and shares on Twitter his picture in which he is a holding big sign of “strike for climate.”

Friends of the Earth Europe calls on Norwegian government to step back from oil drilling in Arctic and do not put species there at risk.

Earth Day’s 50th anniversary is celebrated by millions of people around the world online due to the novel coronavirus outbreak.

Writing an open letter to UN Secretary-General Antonio Guterres, BirdLife International calls on the UN to declare a healthy, natural environment as a “fundamental” human right on the occasion of the 50th anniversary of Earth Day.

Elijah McKenzie-Jackson, a 16-year-old climate activist from the UK, says “the climate crisis does NOT go on lockdown” on his seventh week of climate strike online.

Thousands of signs on climate change coming from activists are displayed on the ground in the German capital Berlin.

Over 100 environmental protection organizations around the world, including Extinction Rebellion and Fridays for Future, sign the international unity statement calling to ‘Defend the Defenders’ referring to environmental defenders, especially indigenous people.

Swedish environmental activist Greta Thunberg donates $100,000, she was awarded with Human Act Award, to a UNICEF campaign that aims at children affected by the COVID-19 outbreak, as she calls the pandemic a children rights crisis.

Environmentalists, climate activists announces they will take part in digital strike on May Day with the theme #StandWithWorkers to ensure transition to ‘green economy’.

Australia: Big data can be used to protect nature