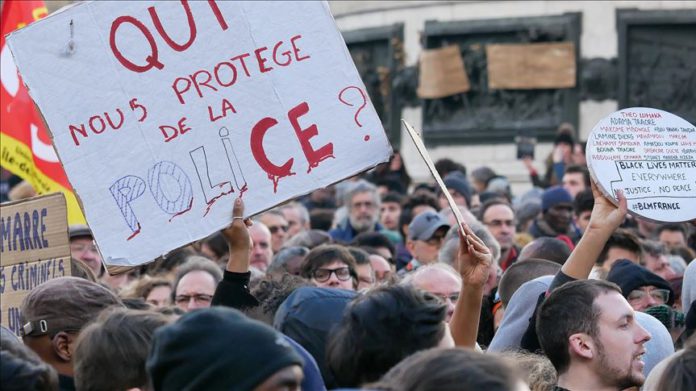 Clashes broke out between police and demonstrators Tuesday as thousands gathered in the French capital to remember Adama Traore, who died in police custody in 2016.

Despite restrictions in Paris on gatherings amid the coronavirus outbreak, people converged in front of a courthouse to protest police brutality.

“Today, it is no longer the fight of the Traore family — it’s all of your fight. Today, when we fight for George Floyd, we also fight for Adama Traore,” said Assa Traore, Adama’s sister, during a speech at the protest.

Floyd, an unarmed black man, died on May 25 after being pinned down by a white police officer during his arrest in the state of Minnesota, which has triggered nationwide protests across the US.

Police in Paris used tear gas against the demonstrators when the protest turned violent.

Police sources estimated that around 20,000 people took part in the gathering.

Protesters from the Yellow vest movement also supported the demonstration with their presence.

Traore, who did not have a criminal record, was apprehended in July 2016 after a 15-minute chase in the suburb of Beaumont-sur-Oise. Police officers pinned him to the ground using the full weight of their bodies.

He lost consciousness in the police vehicle and died while in the courtyard of a police station in a nearby town.

No investigation was opened against the officers involved in the incident and no results came from the judicial process.

Many protests were organized after Traore’s death, and some members of his family were arrested. Riots erupted in the city’s suburbs after the prosecutor said Traore did not die due to police violence but from a heart attack.