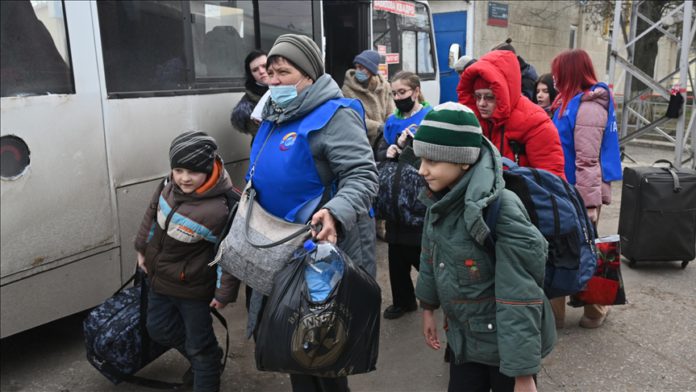 Civilians evacuated from eastern Ukraine’s Donbas region had been settled in 15 regions of Russia as of Tuesday.

Evacuations that began on Feb. 18 continue in the Donetsk and Lugansk regions under the control of pro-Russian separatists in Donbas.

Civilians brought to the Rostov region of Russia close to the Ukrainian border by land and train have been placed in a temporary accommodation center established here.

Some of those evacuated from Donbas are sent to different regions of Russia, including Moscow.

More than 7,000 people, including 3,200 children, have been housed in tents, dormitories and hotels in cities in Rostov.

In the region, 200 temporary accommodation points with a capacity of about 14,000 people have been created.

The evacuated civilians who have been settled in the 15 regions number more than 90,000.

In the Donetsk region, 2,158 cease-fire violations, including 1,100 explosions, were recorded over the weekend, according to the Organization for Security and Co-operation in Europe (OSCE).

The OSCE said that 1,073 cease-fire violations, including 926 explosions, were also recorded in the Luhansk region.

Tensions have risen dramatically this week in eastern Ukraine, with a growing number of cease-fire violations, multiple shelling incidents, and the evacuation of civilians from the pro-Russian separatist regions of Donetsk and Luhansk.