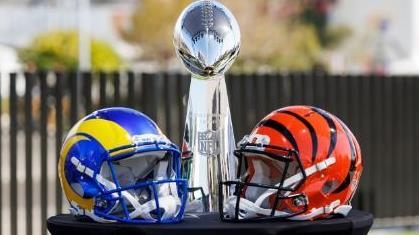 The Cincinnati Bengals will face off against the Los Angeles Rams in Super Bowl LVI on Sunday night.

The final NFL game of the season will be played at the Rams’ home field at SoFi Stadium in Inglewood, California.

With more than 70,000 fans filling the stadium for the most popular sporting event in the US, each spectator will receive a KN95 mask.

More than 184 million people in the US are expected to watch the game that will be televised by the NBC network. The game will be broadcast on more than 225 television stations in 180 countries.

NBC set a record for this year’s Super Bowl advertisements, asking $7 million for a 30-second spot, according to The Hollywood Reporter.

That is a 27% increase from last year’s game that had an average cost of $5.5 million.

While 40% of Americans will watch the game, 21% are expected to tune in for the commercials and 18% say they consider the half-time show the most important part of the event, according to the National Retail Federation (NRF).

Around 90 million are planning to throw or attend a party on Super Bowl Sunday, up 43% from 62.8 million last year, while an additional 13.7 million plan to watch the game at a bar or restaurant.

Total spending on food, drinks, apparel, decorations, and other purchases for the Super Bowl is expected to reach $14.6 billion, with $78.92 per individual, said the retail trade association.

As for purchases, 79% are estimated to be spent on food and beverages, 11% on team apparel, and 9% on a new television.

And the American Pizza Community organization estimates 12.5 million pizzas will be sold in the US on game day.

As for fans who want to attend SoFi Stadium, the cheapest ticket can be found for $4,000 and the average is going for $8,700, according to Ticketmaster and ticket exchange and resale company, StubHub. Top VIP suits went for as much as $100,000 on NFL Ticket Exchange