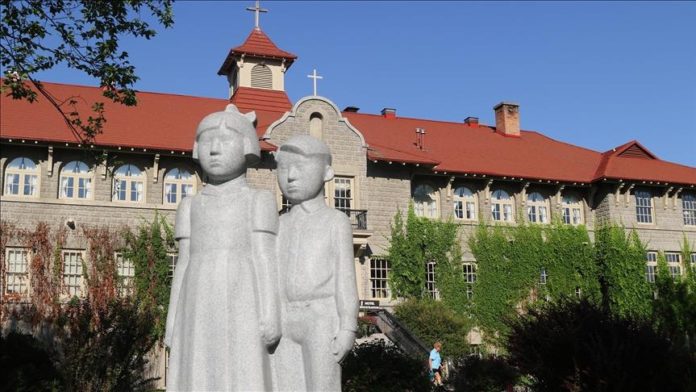 The discovery of more than 1,000 indigenous children’s bodies on the peripheries of boarding schools in Canada came as a shock to many.

But it should not.

After all, it is only another chapter of indigenous peoples’ suffering at the hands of western imperialism, which often used Christianity and missions as a tool to advance its material interests and spread ideologies in extra-western territories.

The enmeshed relationship between Christian missionary education and western imperialism is solid and old.

It dates to the mid-16th century when the Catholic Church recognized the usefulness of education to defend and advance the religion during the counter-reformation era.

Around the same time, the Catholic Church’s aspiration of revitalizing foreign missions corresponded well with the imperialist ambitions of France, Spain and Portugal — especially Franciscan and Jesuit missions operated in a vast area, from the Near East, then under the rule of the Ottoman Empire, to the Americas, Far East, under the direct diplomatic protection and economic support of imperialist powers.

In the geographies they endeavored, they aimed to convert not only non-Christians but the Eastern Christians, including Greek Orthodox, Assyrians, Armenians, Melkites and Nestorians. In this, Catholic education manifested itself as the most efficient and convincing means of Christianization that most of the time went hand-in-hand with westernization.

For instance, French influence in the Near East dates to the late 16th, early 17th century when Jesuit missionaries started to promote the French language and culture along with Catholicism in their schools in Istanbul, Aleppo, Beirut, as many other places in the world.

Consequently, the Francization of Catholic missions, who acted as agents of French imperialism has worsened the relationship between local Christian and non-Christian populations and caused internal divisions among and estrangements within native populations. Similarly, Catholic Franciscan missions, from the early 17th century onwards, facilitated Spanish imperialism’s expansion in the Americas by teaching the virtues of being “submissive Christian subjects of the Spanish Empire.”

The modern Protestant missionary movement that arose in the late 18th and early 19th century in Britain and the US imitated the Catholic method of evangelization through schooling.

In this age of high imperialism, from the very stages of their endeavors, Protestant missions operated schools at every level, in all geographies they had a presence. Many of the foreign schools in the Near East, such as Anatolian College in Thessaloniki, Greece, Robert College in Istanbul. American universities in Cairo and Beirut, track their history to the 19th century.

Indoctrinating native populations about moral and material supremacy instead of directly preaching Protestantism, missionary schools acted as enthusiastic agents of Anglo-Saxon imperialism across the globe.

Jeremy Salt aptly highlights that missionaries, whether in the Ottoman Empire, India or China or in some distant Pacific Island, were not only carriers of the Gospel truth but also came as representatives of the Anglo-Saxon race and agents more generally of a superior western civilization.

Relatedly, Edward Said draws attention to missionaries’ essential facilitator role in the expansion of imperialism from Australia to the West Indies by colonizing the minds of local populations at their schools.

The missionary effect on the indigenous peoples of North America is among the most brutal and saddening. Having a lack of organized states and material sources against the penetration of the French, British and American colonization of their lands, they were unable to prevent their ancestral lands from being stolen by white settlers who came from the other side of the Atlantic.

The American case is known better as a vast amount of scholarship as well as movies and television series have been produced on the Native Indians’ sufferings in the course of colonization of the land that is now the US.

The long-time misery of the indigenous people in Canada, on the other hand, perhaps thanks to the country’s success in presenting itself as a peaceful, peace-loving, welcoming country with no significant domestic or international problems, remained overlooked. Promising free and fertile land to white European settlers, Canada attracted waves of immigration during the 19th century.

Having been stripped of their ancestral lands, indigenous people were compelled to live a limited life in reservations they were driven to by Canada’s Indian Act of 1876.

The Act also mandated residential schools for indigenous children as part of Canada’s forcefully assimilating them by replacing their native culture and religion with British, French culture, and Christianity.

Even though they were run by the Roman Catholic, Protestant Anglican, United and Presbyterian churches, the schools were financed and encouraged by Canadian governments.

The residential school system impaired indigenous children significantly by taking them away from their families, denying their ancestral languages and culture, and exposing many of them to physical and sexual abuse.

Disconnected from their families and culture and forced to speak English or French, indigenous students of the residential school system often graduated being unable to fit into their communities but remaining subject to racist attitudes in mainstream Canadian society. But the system eventually became successful in disrupting the transmission of indigenous practices and beliefs across generations as was originally intended.

Furthermore, the legacy of the residential system has led to an increased presence of post-traumatic stress, alcoholism, drug abuse and suicide, which still persist within indigenous communities.

Having established a commission to investigate the extension of consequences of the Indian residential school system and a decision to compensate victims, the Canadian government now urges the Catholic Church to apologize for its role.

But this does not dig into the essence of the problem, which is the utilization of the Christian religion to advance the profane interests of the states.

In the Canadian case, the state deliberately and systematically exploited Christianity to colonize the land and minds of indigenous people.

Scapegoating churches, particularly Catholic, would seem like distorting historical facts unless the Canadian government would fully accept its historical responsibility and do much more to restore indigenous people’s pride, land and rights.