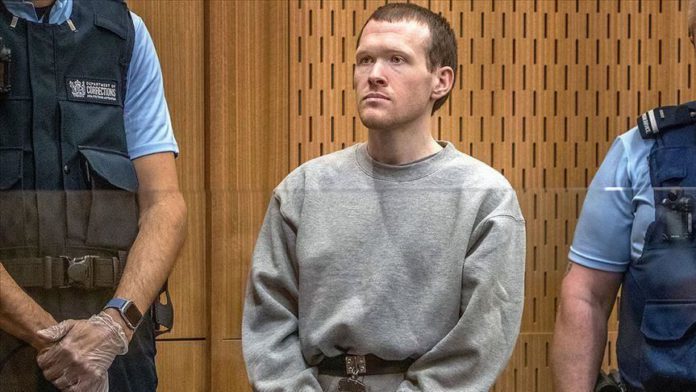 The Australian white supremacist who killed 51 Muslim worshippers last year in New Zealand’s deadliest shooting was sentenced to life in prison without the possibility of parole in the first such ruling ever handed down in the country.

The sentence was handed down to Brenton Tarrant, 29, by Christchurch High Court Justice Cameron Mander, according to the daily New Zealand Herald.

The verdict was announced after at least 91 “impact statements” were made by victims and their kin until today.

Tarrant had refused to make an oral submission before he was sentenced. He sacked his legal team last month and represented himself in court. However, he instructed lawyer Pip Hall to speak on his behalf.

Born in Grafton, Australia, Tarrant had moved to New Zealand in 2017.

The sentencing of New Zealand’s “worst murderer” started Monday with Justice Mander appointed for the hearing.

New Zealand Prime Minister Jacinda Ardern welcomed the court’s decision. She also hailed the “strength” of the country’s Muslim community, who shared their thoughts in court during the hearings, adding that “nothing will take the pain away, but I hope you felt the arms of New Zealand around you throughout this process.”

New Zealand government’s coalition partner asked Australia on Thursday to take back the terrorist where he was born.

In a statement, New Zealand First party leader Winston Peters, who is also deputy prime minister and foreign minister of the country, said: “We applaud the sentencing of the maximum possible term, and hope this helps with the healing of those affected.”

“The judgement is the only one that matched the depravity of the terrorist’s crimes against the Islamic community, and its devastating effect on all people living in this country,” he said.

“New Zealand First also believes this terrorist should be returned to the country that raised him,” Peters emphasized referring to Australia where Tarrant was born and raised until he moved to New Zealand three years ago.

“Now is the time for Australia’s Minister of Home Affairs, Peter Dutton, to receive and carry out the terrorist’s sentence in Australia,” Peters said. “The Islamic community and all of New Zealand has already suffered enough without having to pay astronomical prison costs to keep him safe in our prison system.”

However, New Zealand Prime Minister Jacinda Ardern said there was currently “no legal basis for extradition”.

“[…] and if it were to happen, the wishes of the victims’ families would be paramount,” said Ardern, who is yet to publicly utter the terrorist’s name.

The country’s Justice Minister Andrew Little said that it would require a new law to be passed to deport Tarrant to Australia.

Turkey welcomed the ruling jailing Tarrant for life without parole.

“Turkey will continue its determined and principled stance against discrimination of all kinds,” it added.