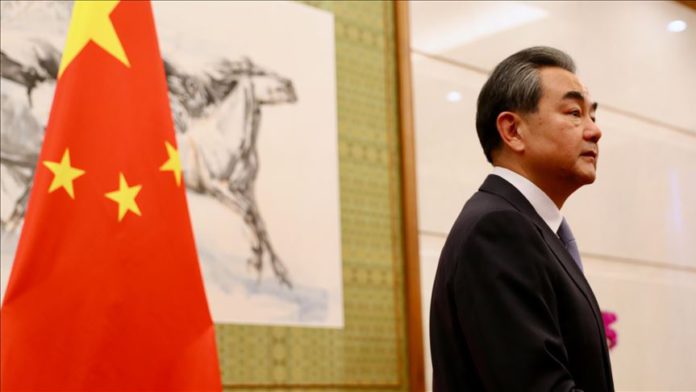 China’s state councilor and foreign minister on Thursday evaluated current US-China relations in an exclusive interview with Xinhua news agency, hitting back against recent remarks by the US that he said amounted to a renewed “Cold War mentality.”

“The assertion that the US policy of engagement with China has failed is just a rehash of the Cold War mentality,” said Wang Yi, in criticism of US Secretary of State Mike Pompeo.

Yi said Pompeo’s recent remarks that the policy of engagement with China pursued by successive US administrations since President Richard Nixon had not produced its goal “turns a blind eye to all that has been achieved in China-US relations over the past decades, shows ignorance of the historical process and a lack of respect for the Chinese and American peoples.

“This is a political virus which is understandably questioned and rebuked by people in the United States and the international community.”

“Forty years on, while China and the US are quite different in social system and many other aspects, such differences have not affected the peaceful coexistence and cooperation between the two countries, and they should not affect their bilateral ties in the future,” he said, adding that since it was “neither necessary nor possible” for the sides to change each other, they should instead respect each other’s independent choices.

Yi also stressed that China would continue to pursue development and progress to satisfy its people’s desires and “new, even greater contributions to mankind.”

He denied purported claims that China had taken advantage of the US, arguing that both Washington and Beijing had benefited from cooperative ties.

“Both countries have benefited much from this cooperation, and no one is being taken advantage of or being ripped off.”

“China has achieved rapid growth in part thanks to its opening-up to and cooperation with the rest of the world, including the US. China’s continued growth has also created sustained demand and an enormous market for the US and other countries,” Yi added.

“Over 70,000 American businesses have made investment in China with a total sales volume of $700 billion. Among them, 97% are making a profit. Even with the trade friction and COVID-19, the vast majority of American companies in China still want to stay and are doubling down on investment in China,” he added.

In reference to recent US actions that allegedly “undermine people-to-people and cultural exchanges with China,” Yi said relations between the two countries are facing the “gravest challenge since the establishment of diplomatic ties,” and that their exchanges and cooperation in many areas were being seriously disrupted.

“The root cause is that some American politicians who are biased against and hostile to China are using their power to smear China with fabrications and impede normal ties with China under various pretexts,” he added in response to the question that cited US harassment of Chinese students, obstructing academic exchange and imposing “restrictions on Chinese media operating in the United States.”

Rejecting any attempt to create a so-called “new Cold War,” Yi said such actions contradicted the fundamental interests of the peoples of China and the US, as well as the global trend toward development and progress.

“The Cold War, which inflicted great sufferings to the world, should not be allowed to repeat itself.”

Yi stressed that China was open to dialogue and “candid, effective consultation” with the US, adding that it would respond to the “impulsive moves and anxiety” of the US in a manner that was “cool-headed and sensible.”

“We are ready to restart the dialogue mechanisms with the US side at any level, in any area and at any time. All issues can be put on the table for discussion,” Yi said.

Explaining that Beijing had proposed that the two countries “draw up a road-map for future interactions,” he urged Washington to stop acting with “arrogance and prejudice,” and rather enter into constructive dialogue on “equal footing.”

“We hope that it will work with us to ease current tensions and put the relations back onto the right track of no conflict, no confrontation, mutual respect and win-win cooperation. This serves the shared interests of the two peoples and meets the expectation of the international community,” he added.

Commenting on “fierce attacks” by US politicians on the China’s Communist Party, the top diplomat said this was not uncommon.

“There have always been forces in the United States attempting to rebut the leadership role of the CPC and China’s path of socialism with Chinese characteristics. Their purpose is notably obvious, i.e., to contain and destabilize China,” Yi said.

“It is the CPC [Communist Party of China] that has led us in blazing the path of socialism with Chinese characteristics, turning the once impoverished country into the world’s second largest economy,” he added.

Yi said China hoped the US would respect China’s social system and the Chinese people’s choice, “and give up its failed interventionism.”