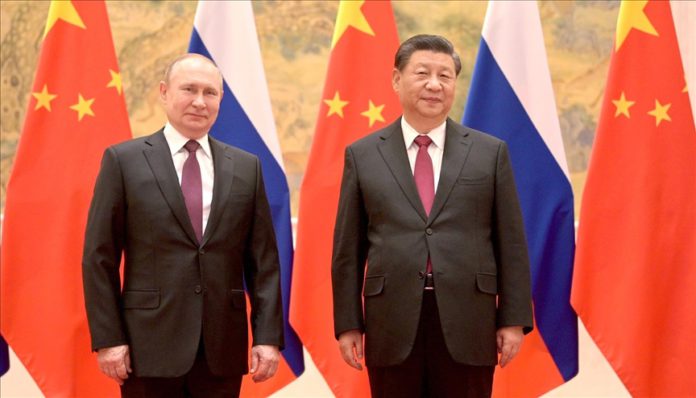 China on Friday put its weight behind Russia in opposing NATO’s expansion eastward amid ongoing tensions with Ukraine.

“The (two) sides oppose further enlargement of NATO and call on the North Atlantic Alliance to abandon its ideologized cold war approaches,” said a joint statement released by the Kremlin after a meeting between Chinese President Xi Jinping and his Russian counterpart Vladimir Putin in Beijing. They met ahead of the Beijing Olympics opening ceremony.

It urged NATO to “respect sovereignty, security and interests of other countries.”

There have been fears of a military invasion for weeks because of the deployment of Russian soldiers in the border area with Ukraine. Moscow denies planning such a step.

Ukraine and Russia have been locked in conflict since hostilities broke out in the eastern Donbas region in 2014 after Moscow annexed the Crimean Peninsula.

Russia has demanded security guarantees from the West, including that Ukraine would not join NATO.

The US and NATO handed their written responses to the proposals, but Moscow said its main concerns were ignored.

Xi and Putin called on NATO to “exercise a fair and objective attitude towards the peaceful development of other states.”

“Russia and China stand against attempts by external forces to undermine security and stability in their common adjacent regions, intend to counter interference by outside forces in the internal affairs of sovereign countries under any pretext, oppose color revolutions, and will increase cooperation in the aforementioned areas,” the readout said.

They expressed “grave concern” on “serious international security challenges,” and that “no state can or should ensure its own security” at the expense of others.

On Washington’s increasing engagement in Asia Pacific, the statement noted that both Beijing and Moscow “stand against the formation of closed bloc structures and opposing camps” in the region.

We “remain highly vigilant about the negative impact of the United States’ Indo-Pacific strategy on peace and stability in the region,” it said.

Russia also reaffirmed its support for the “One-China principle,” saying “Taiwan is an inalienable part of China, and opposes any forms of independence of Taiwan.”

“Our oilmen have prepared good new solutions for the supply of hydrocarbons to the People’s Republic of China. And the gas industry has also taken another step forward – I mean a new contract for the supply of gas to China from the Russian Far East at 10 billion cubic meters per year,” he said.

The two countries reached a new record trade turnover of $140 billion, the Russian president said, adding that it is a step to reach $200 billion.

Xi said his meeting with Putin will give an additional impetus to the development of Russian-Chinese relations.

“The world has entered a new period of upheaval and change” and that “humanity is facing many challenges and crises,” he said.

In these circumstances, he added, Russia and China “remain committed to the original goal – making unremitting efforts for the sustainable development of relations” and protection of their fundamental interests.

“Everything is getting stronger (between Russia and China) – political and strategic mutual trust,” he said.

Xi said Moscow and Beijing will continue to promote “true multilateralism,” and strive to transform mutual trust into practical cooperation “for the benefit of the two peoples.”

The meeting ended with the signing of 16 agreements and MOUs, including political-strategic plans and four commercial contracts.

It was Xi’s first in-person engagement with a foreign leader in nearly two years. He has not left the country since January 2020 due to the COVID-19 pandemic.