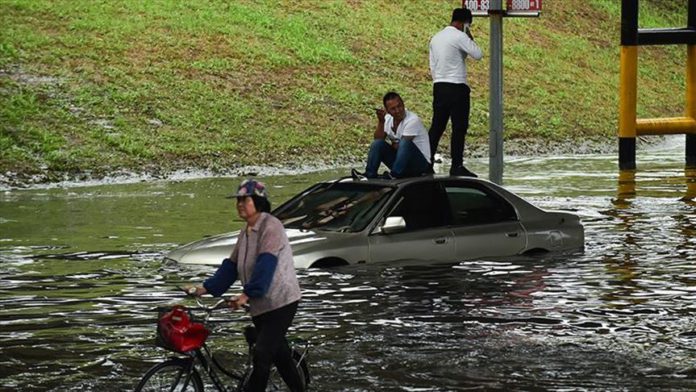 Amid the coronavirus pandemic, floods have caused devastation in parts of China and Japan, triggering economic losses.

The flood crisis forced China to deploy nearly 24,000 soldiers in the country’s east where over 6 million people have been affected.

Over half a million residents have been evacuated in the hard-hit Jiangxi province, daily Global Times reported on Tuesday.

The floods which hit the region in early July has caused over $1.6 billion loss in nearly 100 counties of 10 cities in the province.

The water levels in the country’s largest fresh water the Poyang Lake in Jiangxi rose to 22.6 meters (around 72 feet) on Monday, breaking the previous 22.52-meter record in 1998.

Across China, more than 38 million people have been affected by floods, with 141 people killed or missing.

Meanwhile, China has reported three new virus cases with all of them being imported. There are 1,982 imported infections in the country.

China has confirmed 83,605 infections and 4,634 deaths ever since the virus outbreak in late December last year.

66 municipalities affected by floods in Japan

As the death toll due to floods rose to 70, Japan on Tuesday decided to use 2.2 billion yen ($20.5 million) from Japan’s reserve funds for the 2020 fiscal year to combat economic fallout of the deluge, Kyodo News reported.

Torrential rains have hit the country’s Kyushu island and western and central regions for about a week since early this month.

The funds will be used to help disaster-affected small businesses as well as the agricultural, forestry and fishery industries in the southwestern region of Kyushu.

Also, the government said the money will be used to “supply essentials to people’s lives and livelihoods” such as water, food and emergency cardboard beds to ad hoc shelters, and face masks, without waiting for local municipalities to request such help.

At least, 61 municipalities in Kumamoto and five of the country’s other 46 provinces will benefit from the relief.

Nearly 23,000 people have tested positive for coronavirus in the country so far.