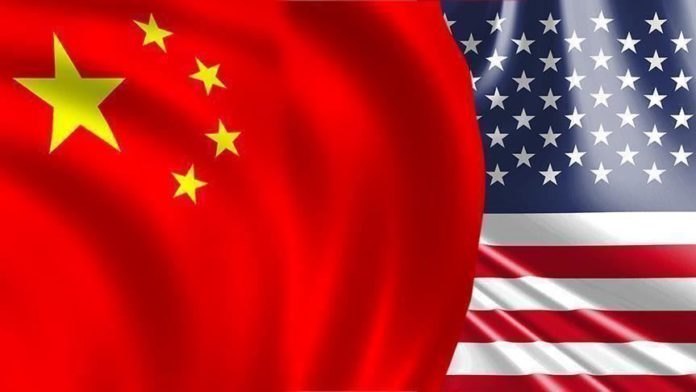 China on Monday criticized the US for a recent visit to Taiwan, accusing Washington of intervening in its territorial integrity.

Addressing a press conference in Beijing, China’s Foreign Ministry spokesman Wang Wenbin said: “Taiwan is an inalienable part of Chinese territory and the so-called ‘middle line’ in the Taiwan Straits does not exist,” the Global Times daily reported.

The statement comes after the Chinese People’s Liberation Army (PLA) air force jets made rounds over the Taiwan Strait, while a top US official was on a visit to Taipei, triggering anger in Beijing.

The so-called “middle line” in the Taiwan Strait was drawn by the US when it signed the Mutual Defense Treaty with Taiwan in 1954.

An official of Taiwan’s Ministry of National Defense (MND) told the daily Taiwan News that Taipei would “definitely fire back if first shot at.”

The MND has “revised the term ‘first strike’ to ‘the right to counterattack for self-defense,'” the official added.

Beijing launched a fresh military drill in the Taiwan Strait last Friday when US Under-Secretary of State for Economic Growth, Energy, and Environment Keith Krach landed in Taipei to attend a memorial service for former Taiwanese President Lee Teng-hui.

Taiwan had complained that the PLA jets had crossed the mid-line twice to enter the island nation’s air defense identification zone last weekend.

The island nation, having diplomatic relations with at least 16 countries and territories, has reported only five alleged Chinese incursions across the line — including the latest ones — since 2016.

Krach was the second highest-profile US official to visit Taiwan. Beijing sees US officials visiting Taiwan as interference by Washington in its territory.

Denouncing the Chinese drills, Taiwan President Tsai Ing-wen said Sunday the activities were “more than just a threat to Taiwan.”

“I believe these activities are no help to China’s international image, and what is more have put Taiwan’s people even more on their guard, understanding even better the true nature of the Chinese communist regime,” she said, according to daily Taipei Times.

“Additionally, other countries in the region also have a better understanding of the threat posed by China,” Tsai added.

The posture of state-run Chinese media has also ratcheted up aggressive campaigns against US visits to Taiwan.

In its latest editorial, the Beijing-based daily Global Times wrote: “The collusion between the US and Taiwan island is becoming the most prominent source of turbulence in the Taiwan Straits. The PLA military exercise this time further focused on deterrence and a strike. If the US and Taiwan island think they can realize ‘normalization’ of relations by adopting ‘salami tactics’, they will be plunged into peril and risks.”

“The US and Taiwan must not misjudge the situation, or believe the exercise is a bluff. Should they continue to make provocations, a war will inevitably break out,” it said, warning that Beijing had shown it “doesn’t fear war” in its recent tension with India in the Ladakh border region in Jammu and Kashmir.

“Taiwan is a small place. It has no conditions for a modern military confrontation. Taiwan independence is a dead end.”

India lost 20 soldiers in heightened border tensions with China this June before agreeing to a five-point de-escalation plan.

“China and India are holding the sixth round of corps commander-level talks over the border issue,” China’s Foreign Ministry spokesman said Monday.