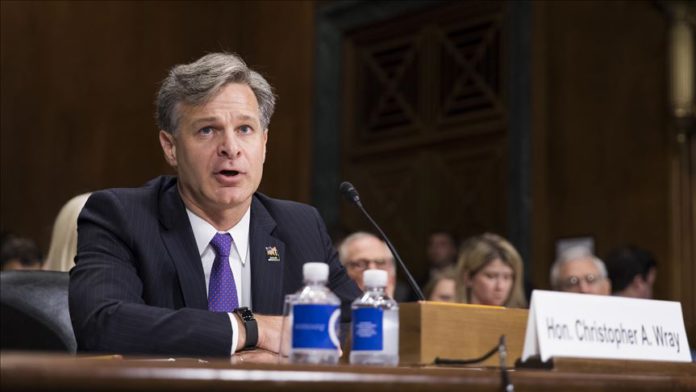 Joining the anti-China chorus in the country with blistering remarks, the FBI Director Christopher Wray has designated China as the greatest future threat to economic prosperity of the US.

“The greatest long-term threat to our nation’s information and intellectual property, and to our economic vitality, is the counter intelligence and economic espionage threat from China,” Wray said at the US-based think tank Hudson Institute on Tuesday.

China denies allegations of intellectual property theft and slams the US for interfering in its internal affairs from Hong Kong to South China Sea.

Wray explained that confronting the threat does not mean the US should severe business ties with the Chinese, restrict visitors, deport Chinese students or refuse to coexist with China on the world stage.

“It does mean that when China violates our criminal laws and international norms, we are not going to tolerate, much less enable,” he said.

The FBI chief went on to say that the Chinese government has caused “breathtaking” financial damage on the American economy, but he did not come up with an exact number.

His comments came a day after Secretary of State Mike Pompeo’s threat to ban TikTok and other Chinese social media apps.

Trump administration will investigate the infrastructure of Chinese social media presence in the US as it did with Chinese telecommunication giants Huawei and ZTE, Pompeo said in a Monday interview with the Fox News.

The CIA, FBI, and the Trump administration has long been on the same page blasting China’s role beyond its region.

“Unfortunately, I think [China is] working to diminish U.S. influence in order to advance their own goals” in the Asia Pacific and beyond, CIA Director Gina Haspel said in September 2018.

The ongoing trade war between the world’s top two economies, initiated by US President Donald Trump, has sent shockwaves through international markets on fears that it could prompt a worldwide economic slowdown.

December 16, 2019
We use cookies to ensure that we give you the best experience on our website. If you continue to use this site we will assume that you are happy with it.Ok