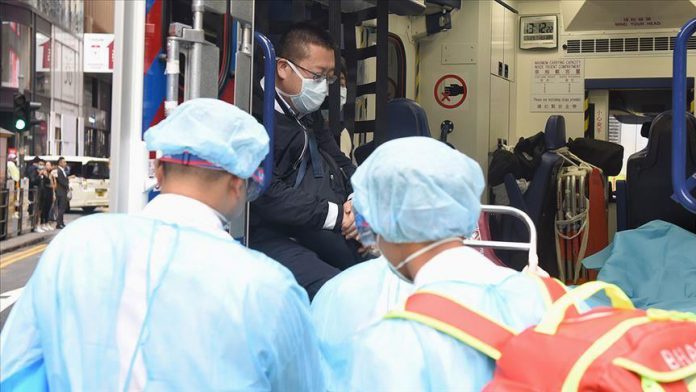 The death toll in China from the novel coronavirus outbreak has climbed to 56, local media reported on Sunday.

“During the past 24 hours, 688 new confirmed cases, 1,309 new suspected cases and 15 deaths from the disease (13 in Hubei, one in Shanghai and one in Henan) were reported,” Xinhua news agency said in a report, citing China’s National Health Commission.

“The pneumonia situation had resulted in 56 deaths, while 49 people had recovered and 2,684 remained as suspected patients,” the agency added.

According to the commission, there were a total of 1,975 confirmed cases of pneumonia caused by the novel coronavirus (2019-nCoV), including 324 in critical conditions.

It said a total of 23,431 close contacts have been traced and 21,556 of them were under medical observation.

According to Xinhua, ten confirmed cases had been reported in Hong Kong and Macao special administrative regions and Taiwan, with five in Hong Kong, two in Macao and three in Taiwan.

The virus originated in Wuhan city — the capital of Hubei — and has now spread across 29 provinces in the country. Over 20 cases were reported in Japan, North Korea, South Korea, Thailand, the U.S., Singapore, France, Malaysia, Nepal, Australia and Vietnam.

According to a Hong Kong-based daily, South China Morning Post, the U.S., France, and Russia were preparing to pull their citizens out of Wuhan.

“Other countries are ramping up quarantine measures in an attempt to prevent further infections in their own territories,” the daily reported.

On Saturday, Turkey’s Embassy in Beijing called on Turkish citizens living in the virus-affected areas to contact the embassy or consulates.