TurkishPress
Home News China: 141 killed or missing due to floods since June 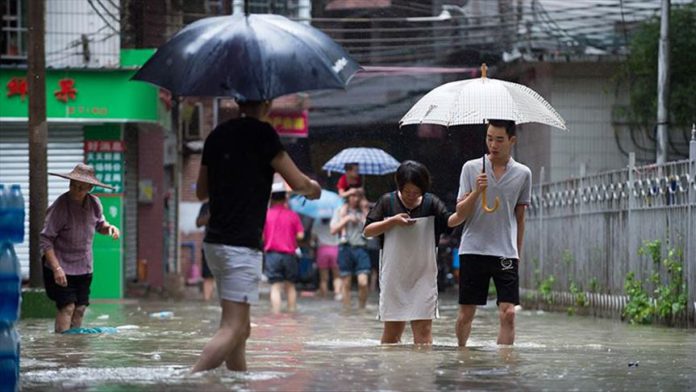 At least 141 people have died or gone missing due to floods in China since early June, official media reported on Monday.

According to Global Times, 433 rivers across the country have been flooded while 33 of them have recorded levels of all-time high.

The floods have affected almost 38 million people across the country while destroyed 28,000 houses, the daily reported.

Last week the Ministry of Emergency Management reported that 271 lives were lost to natural disasters in the country during the first half of 2020.

Some 19,000 houses were destroyed and 785,000 others damaged during the last six months across mainland China, causing an economic loss of $11.5 billion, according to the ministry.

The June 8 floods affected at least 1.76 million people, with 120,000 evacuated, nine dying and five missing, according to the National Disaster Reduction Centre of China.

In 2019, natural disasters such as floods, typhoons, droughts, earthquakes, and landslides caused about $47.5 billion worth of losses to the East Asian country.

At least 909 people were killed or went missing, with about 130 million more adversely impacted, including 5.29 million evacuated.

The neighboring Himalayan nation of Nepal is also facing floods and landslides due to heavy downpour in recent weeks.

At least two people died and ten others went missing in several landslides in the central Tanahun district following heavy rains on Sunday night, according to local daily Kathmandu Post.

Hundreds of people have been displaced due to the steady rise in the water levels in several rivers, including Saptakoshi, the country’s biggest river, over the past few days, said the report, citing police officials.

Around 100,000 people will be displaced in case the river breaches its embankment in the Daluwa locality in central Nepal, the daily said, citing Devnarayan Yadav, chairman of Koshi Victims Society, an organization that works for those who fall victim to the flooding and inundation due to rivers.

Over a dozen people have been killed this month due to floods and landslides in the country.