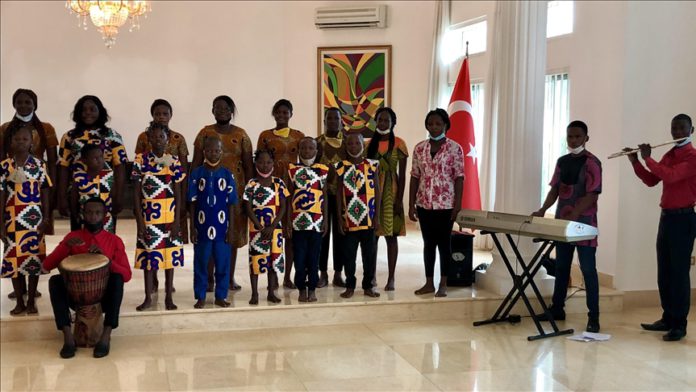 A children’s choir renowned in the West African country of Benin sang the Turkish national anthem on its centennial anniversary.

Les Choeurs du Benin recited the Istiklal Marsi, or March of Independence, at the Turkish Embassy in the city of Cotonou.

Turkish Ambassador Kemal Onur Ozceri told Anadolu Agency that they had proposed the event to the country’s most successful young choir for the 100th anniversary of the approval of Turkey’s anthem and that the group immediately accepted.

“None among them know Turkish. After two weeks of rehearsals, they achieved a very good result with only the notes and tape recordings we gave them,” Ozceri said.

“We’re very pleased that these young people, who came to our embassy in their beautiful ceremonial clothes, sang our anthem so successfully. We’re proud,” he added.

Founded by Felix Nassi in 1993, Les Choeurs du Benin had previously participated in festivals in other countries, including Switzerland, Canada, and South Korea.

Turkey’s parliament approved a motion announcing 2021 as the year of the Turkish national anthem.

The Turkish national anthem was written in 1921 during the War of Independence as Turkey battled occupation by foreign forces after World War I.

It was penned to encourage the fighting army and motivate the struggling nation. It is also the official anthem of the Republic of Turkey, founded two years later in 1923.

The anthem, consisting of 41 lines and 12 quatrains, centers around timeless themes such as independence, war, civilization, faith, spirituality, courage, heroism, and hope.