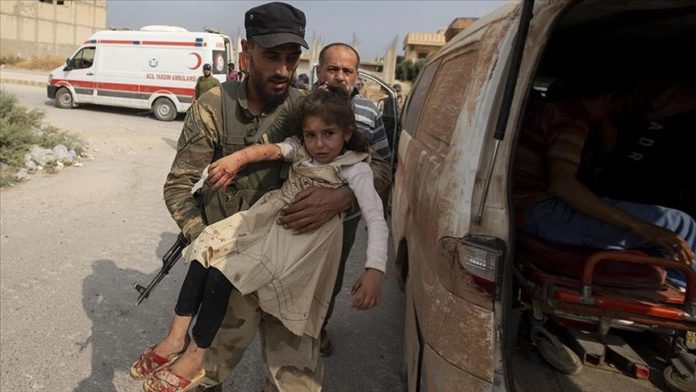 YPG/PKK terrorists, who infiltrated into the area of Turkey’s Operation Peace Spring, have detonated a roadside bomb in Syria’s Tal Abyad town, causing a Syrian family their children.

Terrorists planted an explosive device on a road used by civilians to go to their fields, according to security sources.

Two brothers, 10-year-old Vasik and 14-year-old Mohammad, died Monday when PKK terrorists detonated a roadside bomb as a van carrying the family was passing by the road, 200 meters north of the front line.

The driver of the van was rescued by the Turkish soldiers in the area.

“We were on our way to irrigate our field to earn a livelihood when the attack took place”, Mahmut al-Sheikh, who lost his two children in the terrorist attack, told Anadolu Agency.

“I remember everything about my children. They are a part of my blood. I couldn’t sleep last night. Their killing cut me to the bone,” he said.

Since the removal of YPG/PKK from Tal Abyad and Ras al-Ayn, dozens of civilians have been killed and injured by car bomb attacks and trapped mines.

The Syrian National Army, a rebel group which is fighting the Assad regime and is Turkey’s local ally in Syria, is working to defuse the mines in Ayn Issa and Tal Abyad districts.

Tal Abyad is within the area of Turkey’s Operation Peace Spring, launched on Oct. 9, 2019 to eliminate YPG/PKK terrorists from northern Syria east of the Euphrates River to secure Turkey’s borders, aid in the safe return of Syrian refugees, and ensure Syria’s territorial integrity.

The operation has been paused following two agreements with the US and Russia allowing terrorists to withdraw from the planned terror-free zone.

But YPG/PKK terrorists continue to launch attacks on civilians.