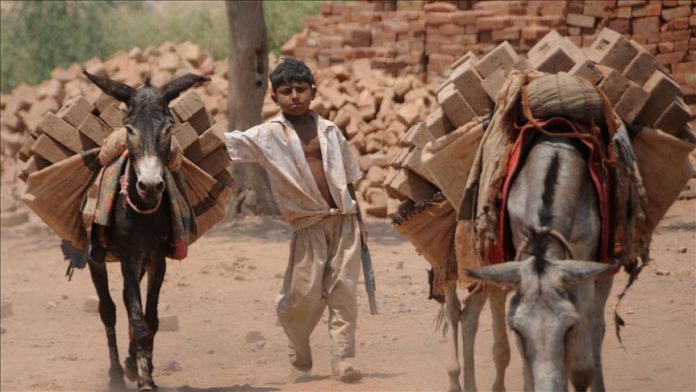 Without any chance to understand how the world works, child laborers think of it as a system built solely on money and suffer as a consequence, said a Turkish child development specialist.

According to International Labor Organization figures, some 218 million children across the world are currently employed, and 152 million of them are child labor victims.

But what kind of physical and psychological problems do children who start working at an early age face?

Bekaroglu stressed that the employment of children at a young age prevents them from growing and developing in a period when they need physical care but instead face mistreatment.

“Back in the day, children would be considered little adults and so were given jobs. But today, with science, we showed that actually the mechanism behind this is different. They are not little adults. They have mechanisms that keep developing,” she said.

Bekaroglu said the responsibilities given to a child should be commensurate with their age.

“When a responsibility that even a 30-year-old individual faces difficulties completing is given to an 8-year-old, it gives the child a sense of failure, frustration, and eventually they come to believe that they are unable to control or change the situation. This is called learned helplessness,” Bekaroglu said.

“When it’s time for that person to do that responsibility when he/she comes of age, they won’t even try because they tried several times before and failed,” she added.

Gamze Dagar, a clinical psychologist, said that beginning a challenging work-life at an early age negatively affects personality and character formation of children under the age of 15.

“If a child who is obliged to work begins to feel a sense of responsibility more than necessary, the child’s personality and character formation is greatly damaged,” Dagar said.

“According to some scientific research, the risk of becoming depressed is higher in children who are obliged to work than in those who do not need to work,” she said.

Although the number of child workers continues to drop, there are still over 150 million of them who are still victims of child labor.

Unfortunately, this trend is common in Africa, where one in five children is viewed as part of the labor force.

Sense of alienation and isolation from society

Dagar also stressed that these children may think they will never receive any support from anyone else due to their unmet need for support during adolescence.

“According to the World Health Organization (WHO), the sense of alienation and isolation from society, aggression, premature aging, and a sense of worthlessness and inadequacy are observed among child workers, including during adulthood,” she said.

Stressing the importance of having a normal childhood, Dagar said the concept of child labor, which is contrary to children’s development, wears out child workers much quicker than usual, and causes burnout syndrome.

“When those children grow up, they feel like they carry the whole responsibility of the world on their shoulders. They always feel pressure on them and can’t freely live their feelings and desires,” she said.

Dagar also said that there is a lack of self-awareness among child workers, leading to frustration, weakness, desperation, and the feeling of worthlessness during their adulthood.

“This shows us that children have an instinctive desire to play. But when a child can’t play, it creates an inner void. So once they become an adult, they say they never lived their childhood, and even if we do not realize this when we are children, we recognize it as an adult,” she said.

Bekaroglu said a pattern of a lack of success as a child also brings along problems like having a hard time adapting to a job and not being able to establish a family or even maintain it.

“In a period where children could learn a lot, their life is being wasted, especially with responsibilities they can’t handle,” she said.

Dagar also warned that individuals who cannot live their childhood have a high risk of continuing their lives unhappily, and it is likely that these people will continue their lives as inefficient individuals in society. This situation also affects their children, becoming a self-perpetuating cycle.

The International Labour Organization (ILO) defines child labor as a violation of fundamental human rights that blocks the psychological and physical development of children.

According to the ILO report Global Estimates of Child Labour, in 2017, almost one of every 10 children around the world was victimized by child labor, with half working in hazardous jobs.