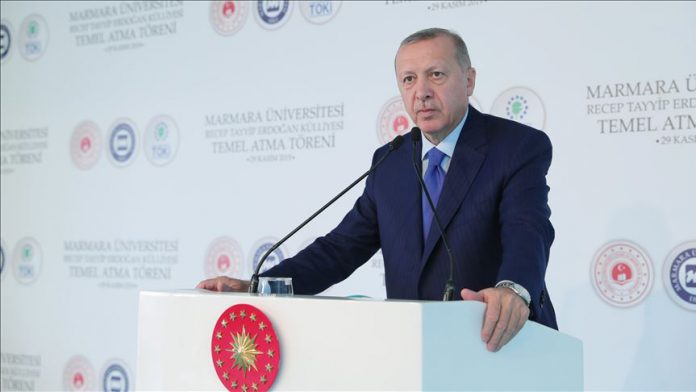 French President Emmanuel Macron should check his own head before describing NATO “brain dead”, Turkish president said Friday in a rebuff of the French leader.

“Look Mr. Macron, I am calling to you from Turkey, but I will tell you again at NATO. First, have your own brain death checked,” said Recep Tayyip Erdogan, slamming Macron over his remarks that Turkey should not expect NATO support for its anti-terror operation in northern Syria.

Speaking at the groundbreaking ceremony of Recep Tayyip Erdogan Complex at Istanbul’s Marmara University, Erdogan said France has no right and authority to be in Syria.

“Neither has the [Syrian] regime invited you there,” Erdogan said, addressing the French leader.

“Expelling or not expelling Turkey from NATO […] Do you have the authority to make such a decision?” Erdogan added.

Erdogan went on to say that Turkey “will not hesitate” to carry out Operation Peace Spring, “if the threats to Turkey from the safe zone and beyond cannot be eliminated within a reasonable time.”

Under two separate deals with the U.S. and Russia, Turkey paused the operation to allow the withdrawal of YPG/PKK terrorists from the planned Syria safe zone.

But the terrorists have failed to withdraw from some areas and continue to attack both soldiers and civilians.

In its more than 30-year terror campaign against Turkey, the PKK — listed as a terrorist organization by Turkey, the U.S. and the European Union — has been responsible for the deaths of nearly 40,000 people, including women, children and infants.