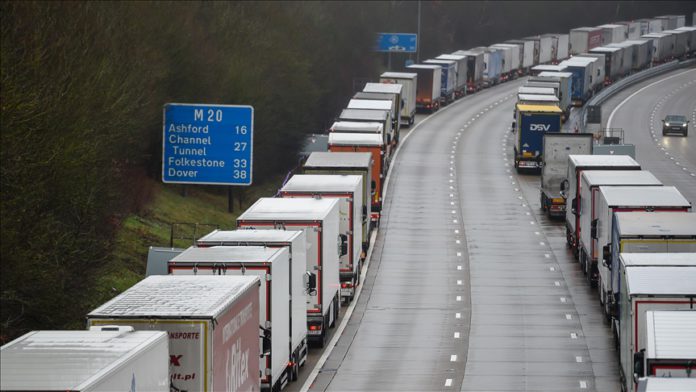 More than 4,000 trucks are still stranded in Britain despite London and Paris agreeing to remobilize them after France’s temporary ban was partially lifted in a joint agreement on Tuesday night.

Chaotic scenes erupted on Wednesday morning in Dover as truck drivers, who had been barred from crossing the Channel to go to France since Sunday due to the latest variant of coronavirus discovered in the UK, started protesting the lack of action by the authorities concerned. Minor scuffles were also seen between truck drivers and the police.

Disappointed drivers protested as they were stuck in Dover although France had allowed them to go on their journeys after showing a negative COVID-19 test result.

More than 1,500 trucks were forced to park at Manston Airport after the authorities had stopped them. The M20 Highway, in addition, is also filled with long truck queues.

The UK and France agreed to resume all rail, air and sea services on Tuesday, requiring the travelers to show “a proof of a negative coronavirus test taken within the 72 hours.”

The protocol agreed with the French government will be reviewed on Dec. 31, but could run until Jan. 6, according to a UK government statement.

“All lorry drivers, irrespective of nationality, will require a lateral flu test,” it said.

Local reports suggest that British authorities are setting up mobile testing centers in Dover, but the backlog can take “two or three days,” according to Transport Secretary Grant Shapps.

The newly discovered variant of COVID-19 is reported to be spreading 70% faster and after its discovery in the UK, more than 40 countries immediately stopped flights from the UK airports, some of them, including France, closing their land border too.

“I am pleased that we have made this important progress with our French counterparts this evening,” Shapps said in a statement on Tuesday evening.

“This protocol will see the French border reopen to those travelling for urgent reasons, provided they have a certified negative COVID test,” he said.

“We continue to urge hauliers not to travel to Kent until further notice as we work to alleviate congestion at ports.”