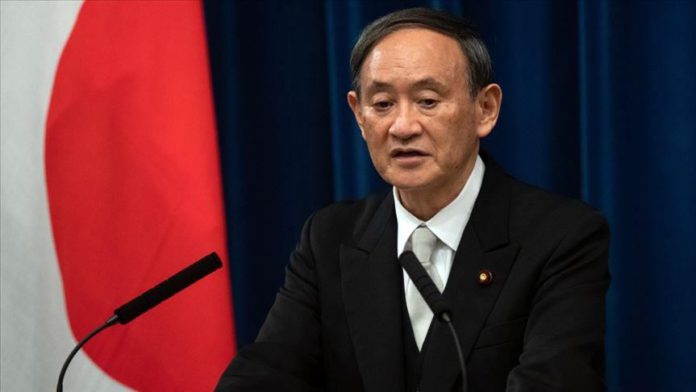 A challenging year awaits Yoshihide Suga, who has been elected the Japanese prime minister in the shadow of a new period of domestic and foreign policy difficulties along with early election claims.

Leader of the ruling Liberal Democratic Party (LDP) Suga was elected the country’s new premier at an extraordinary session held in the LDP-dominated parliament.

Suga received 314 votes in a session of the lower house of the Parliament and 142 in the upper chamber, and he will hold the premiership until the general elections in September 2021.

He was the government spokesperson for the outgoing Prime Minister Abe Shinzo for nearly eight years, and also elected party leader with strong support.

Issues in domestic politics, such as constitutional amendments, missile batteries, and organizing the postponed Olympics without any problems are still hot topics in Japan.

In foreign policy, unresolved problems with North Korea and Russia, as well as uncertain future of the policy of balancing China will be among the diplomacy tests the new Cabinet will face.

According to the information compiled by the Anadolu Agency correspondent, in the short term, the government will aim to revive the economy, which suffers under the epidemic conditions, by keeping the virus under control.

The inadequacy of the $ 2.2 trillion support packages given during the Abe period for the revival of the economy will direct the government to search for new packages.

In the long run, the new administration, which will have to find a solution to the declining birth rate every year, will face the issues of maintaining stable relations with neighboring countries.

Suga will also face an unsolved problem of the Abe era — bringing back Japanese citizens that North Korea detained in the 1970s and 1980s.

It is expected that the problem of the islands will be resolved, and the negotiation with Russia is expected for a peace agreement that has not yet been signed after World War II.

Abandonment of the plan to deploy the US-made Aegis Ashore batteries in the Akita and Yamaguchi states will push Suga to pursue new options.

A possible change in the US presidency in November elections could jeopardize Japan’s balancing diplomacy between the US and China.

Former Senior Deputy of the Foreign Ministry Nobuo Kishi, also the brother of outgoing premier, was appointed to the key seat vacated by Kono.

Yasutoshi Nishimura was appointed the minister in charge of economic revitalization and the government’s coronavirus response, while the 39-year-old Shinjiro Koizumi was named as the environment minister — the only cabinet member under the age of 50.

The Cabinet’s female members are Justice Minister Yoko Kamikawa and Minister for the Tokyo Olympic and Paralympic Games Seiko Hashimoto, who is also the minister in charge of women’s empowerment and of gender equality.

Three-quarters of the new Cabinet, whose average age is 60, served in previous governments, which was perceived as a signal that Abe policies would continue to a large extent.

The fact that Suga, who was replaced by an internal party election, and did not come to power with an ordinary general election, brought up the early election debates in the country.

Speaking to the local Kyodo news agency, Hitoshi Komiya, a political historian at Aoyama Gakuin University in the capital Tokyo, said that while Suga was backed by most factions within the party in the leadership election, he does not belong to a faction himself, and so is not in an infallible position.

“People are drawn when one has power, but whether they will continue to offer support is unclear,” Komiya was quoted. “If he wins [the election], then everyone will hail Suga, giving him power.”

Yu Uchiyama, a political scientist at the University of Tokyo, said that given the main opposition force, the Constitutional Democratic Party of Japan, was just formed Tuesday and that the support rate for a new government is usually high at the start, the best timing for a snap election may be next month, according to Kyodo.

Suga earlier said preventing the spread of the novel coronavirus should take priority in any decision to call for snap elections.

Taro Kono, the minister for administrative reform in the Suga Cabinet, said he expects an early general election in October, noting there is a “very small window” for it, given the upcoming US presidential election in November and that Japan needs to be ready for the Tokyo Olympics in summer next year, Kyodo reported.

Politics experts spoke to Anadolu Agency on the expectations from and difficulties of the Suga era.

Sota Kato of the Tokyo Foundation for Policy Research said Abe’s persistent behind-the-scenes foreign and domestic policies have not come to fruition.

“The prime minister will not be as dominant a political figure as Abe. There will be a lower house election within a year, and it remains to be seen whether the LDP can retain its strong majority,” Kato said.

“Suga has no foreign policy experience, however, so there is no knowing how effective he will be in international relations. It is hard to imagine Suga establishing the kind of personal rapport that Abe was able to build with other world leaders, notably [US President] Donald Trump,” he added.

“The immediate challenge will be coping with the coronavirus pandemic. COVID-19 has devastated Japan’s economy, and it has put a great strain on fiscal resources, so rebuilding the economy will be the next priority,” he said.

“Moreover, his attempts to resolve the territorial problem with Russia and the abductees issue with North Korea led to nothing. Many will look back on the Abe era as a time of missed opportunities,” Brown added.

“Japan would benefit from a bold leader, who is willing to shake up the system and introduce bold reforms. If not, Japan’s economy will continue its lacklustre performance,” he also said.

“Suga will offer continuity with the Abe administration since he has served as chief cabinet secretary since Abe returned to office in December 2012.”

“However, he [Suga] is unlikely to command much support from the public. This is because he represents no real change from the Abe premiership,” Brown explained.

“He is also relatively old, at 71, and is a very poor communicator. If he becomes prime minister, he is not likely to last for long,” he added.