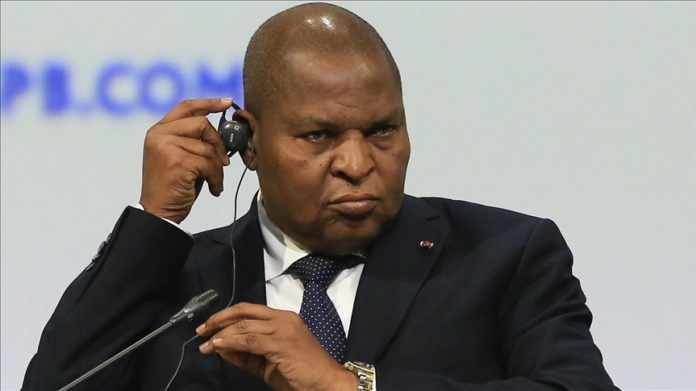 At least 17 candidates are racing for the presidential post in the landlocked Central African Republic (CAR), scheduled to go to polls on Dec. 27.

The African country will elect a new president as well as 105 members for the National Assembly.

The incumbent President Faustin-Archange Touadera is contesting for a second term and is considered leading the race as the candidacy of his main rival and former President Francois Bozize was rejected by the constitutional court.

Touadera, 63, was previously prime minister of the country from 2008-2013 under Bozize’s rule.

Recent rebel attacks on campaign convoys prompted the UN Secretary-General Antonio Guterres to urge all parties to cease hostilities and work towards ensuring conditions conducive to the holding of credible, inclusive, and peaceful elections.

The country is witnessing violence since Seleka rebels ousted Bozize in 2013, who rose to prominence during the rule of dictator Jean-Bedel Bokassa. Experts say, 80% of the country’s territory under the control of different armed groups.

In February 2019, the CAR government signed an agreement with several armed groups that control large swathes of the territory, promising to integrate some fighters into new army units and their leaders into the government. Although the deal got international backing, it has failed to contain the violence in the provinces.

“The stakes in the elections are complex and complicated for the population. Central Africans continue to suffer and have not yet recovered from the wounds of the various political and security crises. So, for the people, talking about elections is like bringing back unrest or insecurity,” a top official of the Economic and Monetary Community of Central Africa (CEMAC) told Anadolu Agency on condition of anonymity due to restrictions to speaking to the media.

He said the current government is facing difficulties in restoring peace. But Central Africans hope that this election may allow one of the opposition candidates to take the reins and establish peace.

“In my opinion it would be good if they put a committee of wise men together with other leaders and to be able to actively participate in appeasing the population, to work together with the armed groups for peaceful solutions,” the CEMAC official added.

He said peace in CAR is possible only through the active participation of different political actors in an inclusive national dialogue involving the rebels.

The official described the rejection of Bozize’s candidacy a distorting the electoral game. Because his candidacy was rejected late and the misfortune is that the entire opposition had lined up behind him. “To disqualify him is a factor of instability in the country,” he said.

Speaking to Anadolu Agency Mack Arthur Deongane Yopasho, a writer said that Bozize is an influential leader as he has taken up the ruling elite.

“It was, therefore, necessary to counter him with the person who forced him out. It is thus a purely political game between leaders. It does not serve the people well. Bozize’s return to the country did not come at the right time,” he added.

Yopasho believed that Central Africans are mature enough to elect their head of state, but peace must first be established.

“This [peace] is necessary before we can think about the development of our country. Candidates for election must have social projects that meet people’s expectations, political dialogue must be frank without pushing the partisans in the wrong direction, but rather in compliance with the electoral code. The law must be respected in the interest of the Central African Republic and its people,” said the writer.

Late President Ange-Felix Patasse ruled the country from 1993-2003 when he was deposed by then rebel leader Bozize.

Patasse suffered a failed coup attempt in 2001, led again by Andre Kolingba. He was later overthrown by then rebel leader Bozize with the support of some neighboring countries.

In 2012, rebel groups met within the Seleka and managed to seize three-quarters of Central African territory. In March 2013, they took the capital and ousted Bozize who fled to a neighboring country clearing the way for Michel Djotodia to assume power.

Clashes between the mainly Muslim Seleka rebel coalition and anti-Balaka militia, which are mostly Christian, plunged the country of 4.5 million people into civil conflict in 2013.

At present, over 600,000 people are internally displaced, with 200,000 living in camps. Another 600,000 Central Africans live outside the country as refugees in Cameroon, Chad, the Democratic Republic of Congo, and the Republic of Congo, according to the UN Office for the Coordination of Humanitarian Affairs.

Catherine Samba-Panza, former transitional president (2015-2016) and the only woman candidate in the race for Dec. 27 presidential poll said the turmoil in her country is caused by the “absence of a participatory political vision”.

“The Central African population has been abandoned. They are the victim of an absent state which no longer protects them,” she told l’Afrique Aujourd’hui Magazine.

She alleged that the executive function, in particular, the presidential office has been reduced to collaborating with rebel groups.

The CAR, which gained independence from France in 1960, has rich untapped deposits of gold, diamonds, and uranium. But the per capita income often listed as being approximately $400 a year is one of the lowest in the world. Although diamonds constitute 40–55% of export revenues, it is estimated that between 30%-50% leave the country clandestinely, according to a World Bank document.

All eyes on Turkish Central Bank's decision on interest rate