TurkishPress
Home News Catholic Church's ‘purpose at one time was to brainwash’ Indigenous people in... 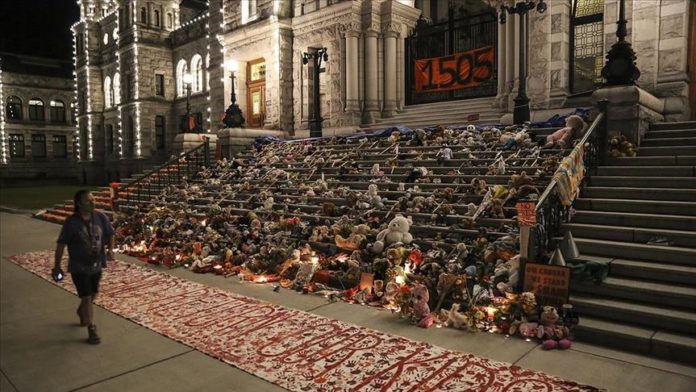 “Today we have intergenerational trauma, we have colonization, and we’re trying to decolonize,” Cadmus Delorme told Anadolu Agency in an interview.

From 1885 to 1972, anyone who went to the Catholic Church and died while staying at the residential school was buried at the grave site, he said.

He said there were headstones at the graves and blamed a priest of the time for not protecting those headstones that were later removed.

“This is not a mass grave site. These are unmarked graves,” he added.

Delorme said these stories are “even challenged amongst us,” adding that survivors have different perspectives as to what happened.

He said some seniors and elderly have “very strong” Roman Catholic faith, while others “have anger and hate and are so upset with the way the church treated them.”

Delorme said the child mortality rate in residential schools was 40-60%, noting that there were “many pandemics,” including smallpox and tuberculosis.

He said they are aiming to identify and mark with names those graves to make sure that “they have a real rest in peace”.

” … We want an apology from the pope,” Delorme said.

He said there are other locations as well to search for graves.

It is estimated that before the last school closed in 1996, at least 4,000 children died and were sometimes unceremoniously buried without their parents ever knowing their fate.

About 150,000 children attended the schools, whose goal was to instill white culture in the Indigenous children. Many of them are said to have suffered from physical, mental and sexual abuse.

Indigenous Services Minister Marc Miller said the time has come to get an official apology from the head of the Catholic Church.

*Beyza Binnur Donmez in Ankara contributed to the story​​​​​​​