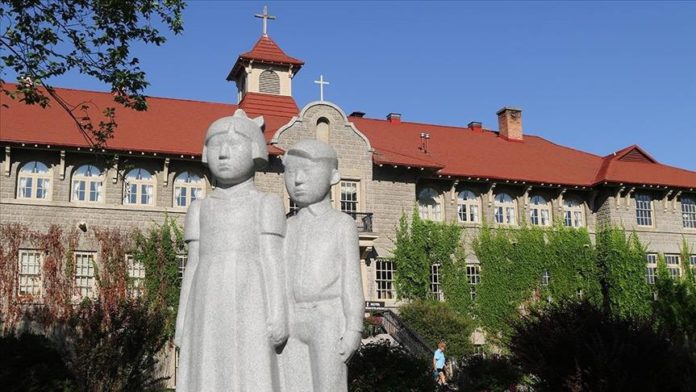 A Catholic priest in Canada was banned by the church from preaching sermons after saying Indigenous residential school survivors were lying about abuse to get more money from the government, it was reported Thursday.

Father Rheal Forest preached for several weeks at St. Emile Roman Catholic Church in Winnipeg, Manitoba, that residential school survivors lied about being sexually abused so they could be paid more money through the Canadian government.

“If they wanted extra money, from the money that was given to them, they had to lie sometimes — lie that they were abused sexually and, oop, another $50,000,” Forest said during mass on July 10. He added that all the survivors he was familiar with liked the residential schools.

While acknowledging that some abuse did take place, he said it was perpetrated by school watchmen, not Catholic priests and nuns.

At another mass, Forest said he would like to get a gun and shoot at those who vandalized Catholic churches because of the history of residential schools.

“If I had a shotgun at night and I’d see them, I’d go, ‘Boom!’ just to scare them and if they don’t run away, I’ll shoot them,” he said, as reported by the Canadian Broadcasting Corporation (CBC).

He rethought his words immediately.

Indigenous leader Kyle Mason told the CBC he was taken aback by the comments.

“(If the church) is really concerned about reconciliation here in Canada, they would be enthusiastically trying to make sure that all their priests and all their staff are well aware and that there would be no room for these kinds of comments,” he said.

In another incident reported Thursday, government documents obtained by the CBC show that millions of dollars meant to be paid to residential school survivors was diverted to unauthorized loans, lawyers and a private fundraising firm.

“How could anybody do something like this?” said Ellen Turpel-Lanfond, director of British Columbia’s University Indian Residential School History and Dialogue Centre, when contacted by the CBC.

The Catholic Church ran about 60% of Canada’s 139 Indian Residential Schools and 150,000 Indigenous children were taken from their parents, sometimes by force, and sent to the schools to be taught white culture.

The other churches involved in running residential schools – United, Anglican and Presbyterian – all paid agreed sums to the survivors years ago.