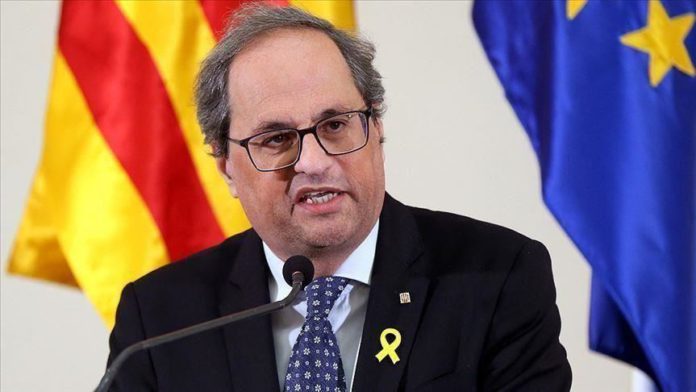 Quim Torra was ousted from his post as president of Catalonia on Monday, as the Spanish Supreme Court upheld a sentence that bars him from holding public office for a year and a half.

The Catalan High Court found Torra guilty of disobedience in December for refusing to take down yellow ribbons and Catalan separatist flags from public buildings in the run-up to March 2019 regional elections.

The ribbons and flags are Catalan independence symbols, and their display was considered a violation of Spain’s electoral laws.

The electoral board said the independence symbols were “tools of political propaganda” and gave Torra 48 hours to remove them, but he did not comply.

Torra tried to appeal the decision in Spain’s Supreme Court, but on Monday the court refused to take up the case. The Supreme Court judges were unanimous in their decision, writing that “he repeatedly and stubbornly disobeyed the electoral board’s orders.”

He is the first active Catalan president to be barred from office due to a legal battle, but former President Artur Mas was also temporarily barred from politics after his term ended.

Carles Puigdemont, whom Torra replaced in 2018, was ousted by the Spanish government after an illegal vote on independence and subsequent declaration of independence. He fled the country shortly after and remains exiled in Belgium.

In a news conference, Torra decried the ruling, saying “today a court, not the Catalan people decided that I cannot be president,” and said he will seek justice in Europe.

But he did say that he will leave office peacefully. Power will be transferred to the Catalan Vice President Pere Aragones.

Torra also announced fresh regional elections in Catalonia, insisting that they should be looked at as a “plebiscite” on independence.

He apologized to his voters on not making progress in terms of creating a Catalan republic, but urged supporters to continue the fight.

Pro-independence protestors are set to take to the streets tonight in opposition to the decision. The last major wave of protests was sparked in October 2019 after the Supreme Court sentenced nine Catalan independence leaders to between nine and 13 years in prison.

Mercenaries back in Sirte: Libyan army