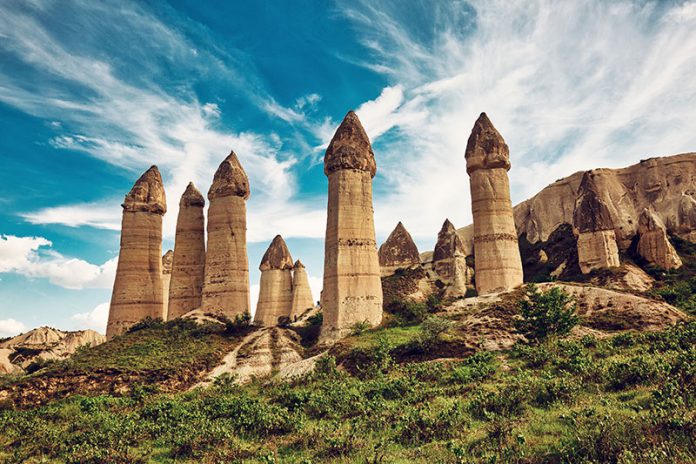 What makes Cappadocia so exceedingly strange are the twisted, billowing forms found in the rocks, forming a ream landscape. Over millions of years, erosion covered the land with thick layers of volcanic tufa forming rock pinnacles, which were then hewn out by man into unique, evocative monuments.

The history of Cappadocia begins some 60 million of years ago when the corrugating motion of the earth’s crust led to the raising of the Tauern chain. These telluric motions were accompanied by volcanic eruptions right throughout the area; the three tall peaks that dominate the region – Erciyes Dag (3917 meters), Hasan Dag (3263 meters) and Gollu Dag – were active volcanoes; these volcanoes are still considered potentially active, even though they have not erupted since the dawn of history as prehistoric and Roman records referred to legendary eruptions.

Like all volcanic eruptions, what accompanied the formation of the Tauren range caused the dispersion of enormous quantities of ash, lapilli, and lava. Once deposited on the ground in this order – from top to bottom – these materials were cemented by geological sedimentation in subsequent eras, forming a rocky tableland. However the erosive process of winds, ice and water ate into the crust, opening up faults and erosion furrows in the ground. The varying hardness of the rocks led to varying degrees of erosion; in the soft tufa on the surface, it created deep clefts, inside which the wind then molded rock pinnacles. However, in the strong, dark basalts, water produced fine crevices in which it penetrated, deepening the cracks until it created vertical cuts across the basalt on the surface and the underlying tufa. In time, water and wind have gradually reduced the rocky tableland to a mass of clustered spires, covered by thicker slabs; over millions of years, the spires have become interspersed, due to the disappearance of some of them, and have taken on the pinnacle shape which we can still see today in Zelve, for instance, in the fairy chimney area. In patches, erosion has completely eliminated the basaits, reducing the tufa to a series of fading mounds.

The Kizilirmak River – the longest in Turkey – is fed by various streams, partly due to the melting of the snowfields on the highest peaks. The flow rate of these streams used to be much greater; in fact, they are responsible for the canyons in the “Snow White Valley” and in the valley of Ihlara, with its lush vegetation in the midst of a barren area.

This fairy-tale landscape has always fascinated man, who has populated it with myths and legends and even settled there. During the VIII and VII millennium B.C., Neolithic peoples settled there in Hacilar and Catalhoyuk, where the oldest paintings in the region came to light, also portraying the volcano of Erciyes. With the arrival of the Copper (VI millennium) and Bronze Ages, it acquired its own ethnic and cultural features, to the point of forming the Hatti civilization during the III millennium B.C. According to Assyrian archives, the capital of the kingdom was in Kanech, now known as Kultepe. In about 1900 B.C., the Hatti civilization changed with the arrival of the Nesa in the region; the merging of the two peoples gave rise to the Hittite civilization, which remained in power for seven centuries in the Middle East. The Hittite dynasties ruled over a real empire, which fought the Babylonians and kings of Mitanni to reach the boundaries of Egypt. The sunset on the Hittites during the XIII century due to invasions by new peoples, leaving a federated kingdom of Tabal in Cappadocia. Subsequently, torn between the Lydians in the south and the Medes in the north, Cappadocia became a Persian satrapy in the mid VI century B.C.. In 404 and 362 B.C., its inhabitants rose up against the Persian Empire, which was attacked by Alexander the Great of Macedonia. Alexander then oppressed a Cappadocian revolt in 332 B.C. but, after the struggle between the diadochoses upon the death of Alexander, it was Ariartes II who founded the Kingdom of Cappadocia, which survived until the end of the II century B.C. The Romans then invaded Anatolia, annexing the area to the Roman Empire in 66 B.C. The province thus formed was very important for the control of its boundaries and for the political struggles within the Roman Empire. Roman ruins testify to the importance of defense, as can be seen from the various citadels. However, they were unable to hold back the Sasanidi nor the Goths in the III century A.D..

In 396, the annexation of Cappadocia to the Eastern Roman Empire led to the complete Christianization of the region. The local inhabitants took fervently to the creed, remaining in close contact with the central Byzantine authority. Religious communities played a particularly active role, preaching spirituality and self-denial. In this way, the early Christian hermits attracted to the area formed religious communities, hewing monasteries out of the rock pinnacles. The first rock caves built by the monks themselves as in the case of St. Simeon, who built a cell in which to enchain himself, were replaced by other, more elaborate monastic complexes, especially after the end of Iconoclasm; in fact, this doctrine which opposed the worship of holy images, led to a recovery of spiritual values, that lasted even after the end of the destruction of holy images. The Open-Air Museum in Goreme, for instance, is tangible evidence of this spirituality and devotion to Christ and the Saints.

The building of complexes in the vertical rocks was quite a feat, but they managed to do an excellent job, getting ideas from Byzantine churches and reinterpreting the structures with an emphasis on elegance and symbolism. The artists were not to be outdone by the architects, as can be seen from the series of frescoes in the dark interiors of chapels, often portraying scenes from the life of Christ. These artists, some of whom not only worked in Cappadocia but also wandered throughout the entire Middle East, filled the vaults of churches with vivid colors and countless images of saints, creating a style of their own distinguished by its symbolism. The influence of mosaics in basilicas in Eastern and Western capitals was mitigated by the spirituality of local monks.

The monks’ retreat to isolated hermitages protected them from the Arab raids but not from the Turks; however, the Seljuks were very tolerant towards Christians in the area, as can be seen from the presence of certain sultans in the frescoes of some churches, Nonetheless, the Seljuks – and Alaeddin Keykubat in particular – studded Cappadocia with marvelous mosques and caravanserais to defend the caravan route network. In fact, their supremacy, which started in the XI century, was accompanied by an economic boom, thanks to the exploitation of inland trade routes, and an artistic revival, as can be seen from the finely worked monuments which have been a source of inspiration to Muslim art ever since. Seljuk power declined at the end of the XIII century, under the pressures of the Karamanogullari and, after the rule of Eretna Bey (1352), their power knew no bounds. After over a century – during which the Eretna ogullari and Karamanogullari built valid monuments and restored various fortresses in Cappadocia – it was the Ottoman Empire that took over. This annexation brought a long period of peace’ to the region, which was inland and therefore more protected, even though art and the economy did not flourish. The Ottoman Empire, which lasted until the beginning of this century, was then overthrown by internal struggles to form a Republic, with the creation of modern-day Turkey in 1923.