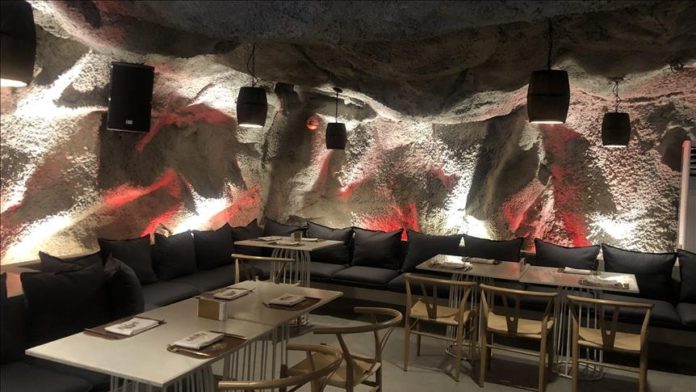 A Cappadocia-themed restaurant opened in Abuja, the capital of Nigeria, offering its customers the experience of being in Cappadocia without ever going to Turkey.

The restaurant, designed with a cave concept, makes customers feel as if they are visiting Turkey via videos of Cappadocia projected over the walls.

Speaking to Anadolu Agency, owner of the restaurant, Oliver George, said he arrived in Nigeria from Canada more than three years ago.

About the concept of the restaurant, George said: “We initially thought of a restaurant with a cave concept. Then we came across Cappadocia by coincidence while doing research on the Internet and we liked it very much.”

Before opening the restaurant, George said he and the architect who designed the restaurant visited Cappadocia, a popular tourist destination in Turkey’s central Anatolia.

He said the restaurant’s menu includes a number of items from Turkish cuisine. “We welcome customers with cologne, and after food, we offer tea and Turkish delights.”

“Some of our customers say they have visited many European countries such as France, the Netherlands as well as the US, but they have never heard of Cappadocia. And now they want to go there, thanks to this restaurant,” he said.

George said he aimed to send tourists from Nigeria to Turkey in cooperation with the Turkish Airlines.

One of the customers, Maryama Shehu, told Anadolu Agency that if this restaurant offers so much, who knows what the real Cappadocia has in store for us.”

“I definitely want to see it,” she added.