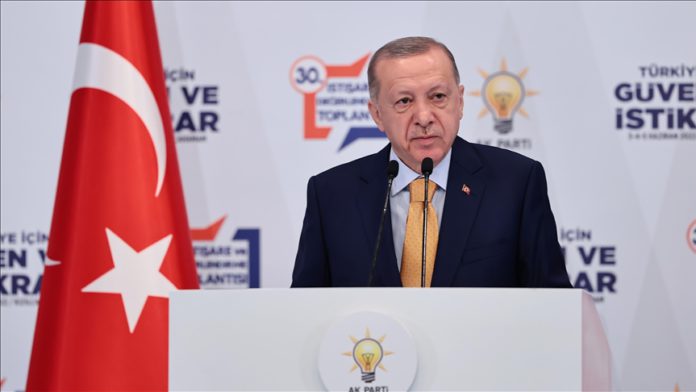 Türkiye and Azerbaijan attach importance to increasing the capacity of the Southern Gas Corridor (SGC) and the current developments in the energy sphere show that these steps are “accurate,” the Turkish president said on Saturday.

President Recep Tayyip Erdogan’s message was conveyed by Türkiye’s Ambassador to Azerbaijan, Cahit Bagci, who attended a special session in the Azerbaijani city of Shusha, liberated in November 2020 from nearly 30 years of Armenian occupation.

In his message, Erdogan described the energy cooperation between Türkiye and Azerbaijan as “excellent” and said it was strategic not only for the two countries but also for the region.

He said Türkiye and Azerbaijan made “vital contributions” to regional and global energy supply security by realizing mega investments such as Baku-Tbilisi-Ceyhan, Baku-Tbilisi-Erzurum pipelines and TANAP.

The Turkish president said in the current critical period, as countries all over the world experience an unfolding energy crisis, the Southern Gas Corridor, of which TANAP forms the backbone, has increased in importance, constituting Europe’s fourth natural gas artery.

Erdogan said in the Shusha Declaration, which Türkiye and Azerbaijan signed after the 44-day Karabakh war between Azerbaijan and Armenia, the two countries showed “the importance they attached to increasing the capacity of the SGC.”

“Current developments in the international arena also show these steps we had taken were accurate,” he said.

Turkiye was a key backer of Azerbaijan during the Karabakh war, which erupted on Sept. 27, 2020 and ended with a Russian-brokered cease-fire on Nov. 10.