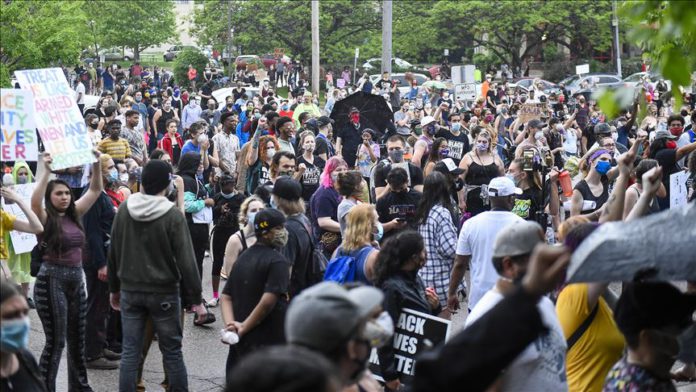 Thousands have flooded to streets of Minneapolis in the US state of Minnesota after killing of a black man in an arrest, eliciting severe rage.

The protesters chanted Tuesday the last words of George Floyd “I can’t breathe,” and “It could’ve been me,” according to the report of CBS Minnesota.

They defended that true justice will not be served until there are charges and convictions.

The mass protests turned into riots after the protesters surrounded the Minneapolis Police Department (MPD) 3rd precinct. Windows of the building and of numerous police vehicles have been smashed and vandalized by spray painting.

“It’s real ugly,” another protester said, cited by CBS. “The police have to understand that this is the climate they have created.”

Many American politicians and celebrities condemned the incident on Twitter, calling it “racism and police brutality”.

Mayor Jacob Frey announced Tuesday that four MPD officers have been fired after Floyd was killed in an arrest.

“This is the right call,” Frey said on Twitter.

Police said Floyd “physically resisted” officers after he exited a vehicle during an arrest that was reportedly made after they approached him while responding to a fraud in a progress call.

The video did not show what led up to Floyd being forced to the ground by the officers.

The local police department said it is handing off the investigation into Floyd’s death to the FBI and “will cooperate fully” with the probe as investigators work to determine whether federal charges are warranted in his death.

Frey earlier Tuesday appeared emotionally shaken when he addressed reporters, saying: “Being black in America should not be a death sentence.”

Floyd’s death has strong parallels to that of Eric Garner who died during a fatal 2014 arrest in New York, repeatedly pleading with officers: “I can’t breathe.”

Another US senator tests positive for coronavirus