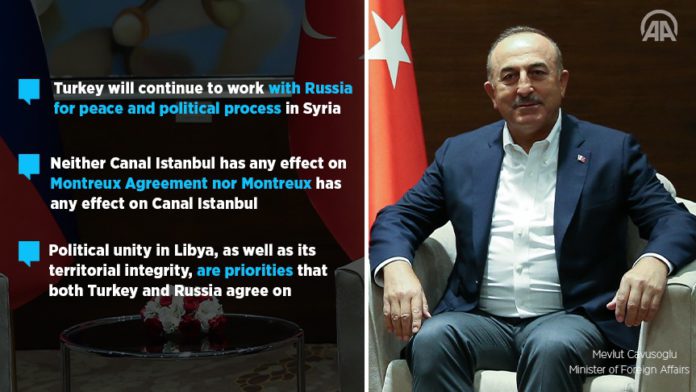 Turkey’s Canal Istanbul mega-project will not impact proper governing of the Turkish Straits, the Turkish foreign minister told his Russian counterpart on Wednesday after bilateral talks.

The planned alternate route between the Sea of Marmara and the Black Sea – set for completion in 2025-2026 – will have no effect on the 1936 Montreux Agreement on the Turkish Straits, nor vice versa, Turkey’s Mevlut Cavusoglu told a joint news conference with Russia’s Sergey Lavrov.

Speaking to reporters in the Mediterranean resort city of Antalya, Lavrov said: “Russia is pleased to work with our Turkish colleagues on the implementation of the Montreux Agreement.”

Montreux gives Turkey control over its straits and authority to regulate the transit of naval warships.

Lavrov added that the canal’s construction will not prepare the ground for foreign military deployments.

Turning to Syria, an issue Moscow and Ankara have worked on for years, Cavusoglu said that Turkey will continue to work with Russia for peace and a political process for the war-battered country.

On Libya, Cavusoglu said that the North African country’s political unity and territorial integrity are priorities that both Turkey and Russia agree on.

On last fall’s military conflict between Armenia and Azerbaijan – which ended in November with a Russian-brokered cease-fire – Lavrov said: “Russia wants Armenians and Azerbaijanis to live as good neighbors and urges reconciliation.”

“We appreciate the activities of the joint command center (with Turkey) in Azerbaijan,” he added.

“Russian citizens see Antalya as an attractive destination, and we will continue our efforts to develop relations in the field of tourism,” Lavrov added about the Turkish Riviera resort.

Traditionally a top destination for Russian tourists, Turkey, like the rest of the world, last year had to shut down most tourism in the face of the coronavirus pandemic.

But vastly improved coronavirus numbers in Turkey, along with a vigorous vaccination campaign and strong safety measures, have reopened the country to tourism, and Russia last week gave green light to full flight service to Turkey.