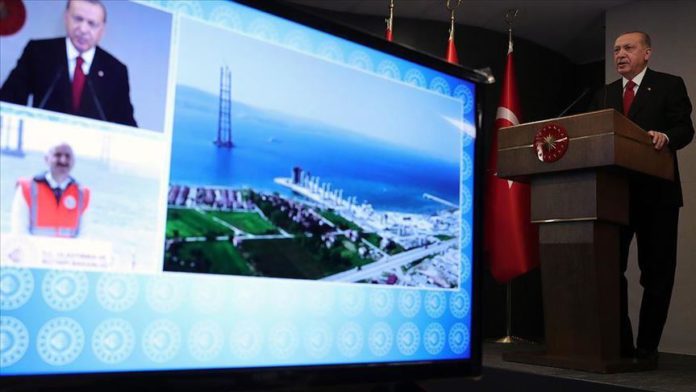 With the construction of Canakkale 1915 Bridge, Turkey realizes centuries’ dream, said the Turkish president on Saturday.

Recep Tayyip Erdogan attended via videoconference to the ceremony for the placement of the last steel block of 318-meter (1,043-feet) towers of the bridge in the country’s northwestern Canakkale province.

“The [1915 Canakkale] bridge with the title of the longest of its kind in the world, will decorate the Strait as a symbol of our 1915 Canakkale Victory,” he said.

He underlined the importance of strong infrastructure and transportation saying the country’s success in it will be the biggest advantage in the world which will be reshaped politically and economically after the coronavirus.

Turkey on Saturday completed 32 tower blocks of 1915 Canakkale Bridge, which will be put into service on March 18, 2022.

The suspension bridge will have the largest central span in the world.

Turkey to roll out local COVID-19 vaccine end of summer﻿﻿﻿