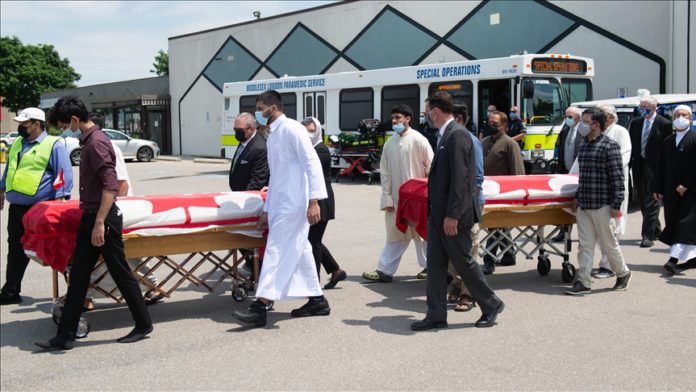 Canada has a distressing and too often fatal record of attacks spurred by hatred of Islam in recent years, according to a Muslim group, and on Monday, Muslim officials announced 61 recommendations to tackle the problem.

“The reality is that Canada has suffered more mass killings motivated by Islamophobia in the last five years than any other country in the G7,” said Mustafa Farooq, head of the National Council of Canadian Muslims (NCCM). “This cannot be allowed to continue.”

Farooq made the statement at a joint press conference Monday with NCCM and officials from the London Muslim Mosque.

The two organizations made the recommendations ahead of the National Summit on Islamophobia slated for July 22. The summit was called by the federal government following the murder of four members of a Muslim family deliberately run down by a truck as they were enjoying a Sunday evening stroll, June 6 in London Ontario, west of Toronto. A fifth member, a nine-year-old boy who was injured, was left orphaned by the hate-spurred attack.

Among the recommendations are criminal code changes to put emphasis on assaults spurred by hate, establishment of a national fund for Islamophobia victims, more focus on dealing with white supremacist groups and inspection to see if such groups have succeeded in placing their members in national security organizations.

As well, suggestions include formation of an anti-Islamophobia plan of action before the end of the year, dealing with Islamophobia in the classrooms, municipal bylaws to deal with the harassment at the local grassroots level and anti-racism campaigns in schools.

“This body of recommendations was compiled after talking to (thousands) of Canadian Muslims (from) coast to coast with the diversity (of) gender, race and class,” Farooq said at the press conference. “Some of them (may) take time to implement, but we hope the commitment to implement happens right away.”

Canada’s dismal record on hate-fueled attacks on Muslims also includes the Quebec City Mosque shooting that left six worshippers dead and 19 injured in January, 2017. It was one of the deadliest mass murders in Canadian history.