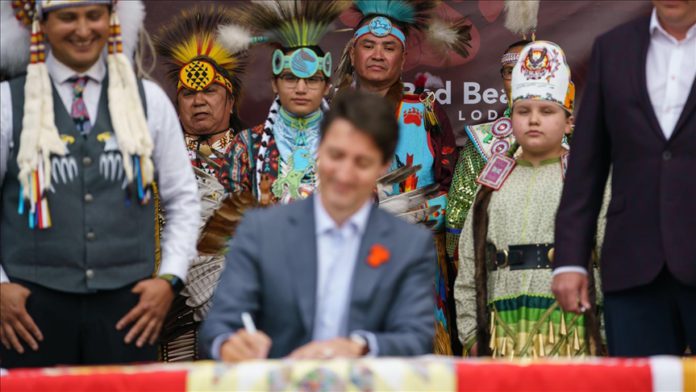 After 70 years, the Cowessess First Nation has retaken control over its children’s welfare under a historic agreement signed Tuesday.

Today, we signed an agreement with Cowessess First Nation and @SKGov to make sure every child can have the best possible start in life – growing up in their communities, immersed in their cultures, and surrounded by their loved ones. pic.twitter.com/ysbg5e5JTz

The agreement officially restores the power of the First Nation to be responsible for its children, which was taken from the Cowessess 70 years ago.

But while the gathering was to herald the first agreement to restore child welfare to a First Nations band, the legacy of Indian residential schools was also on the agenda.

“Canada must acknowledge the truth,” Trudeau said to about 150 people in the gathering of Cowessess citizens. “We [must] come to terms [with it] as a nation – recognizing past wrongs.”

There were 139 Indian residential schools, with the first one opening in the 1820s and the last closing in 1996-97. During those years, about 150,000 Indigenous children were taken from their parents and forced into the schools, where officials tried to instill white culture into them.

The children were in many cases ill-treated, malnourished and beaten. Disease was rampant, and about 4,000 died and were often buried in graves at the schools.

In all, 1,148 unmarked graves were located at three former residential school sites since late May, including 751 at unmarked graves at the former Marieval Indian Residential School at Cowessess First Nation. Most were thought to be children, but teachers and others were sometimes buried at the schools too.

Chief Cadmus Delorme, before introducing Trudeau, said there was “still healing to do” for the families of First Nations people who were subjected to the often-brutal residential schools and those who are still alive today, survivors of the system.

Part of that healing is taking back the care of their children at Cowessess, the chief said.

“Today, we give birth to a new horizon,” Delorme said.

Cowessess became the first of the Indigenous bands to assert its rights to take control over its children in 2020. Tuesday’s signing made it official, and it is the first of many agreements the government is likely to sign restoring child welfare to various First Nations, Metis and Inuit peoples.

Delorme has estimated that there are about 165 Cowessess children under government care.

“This responsibility is a part of our long-term goal of controlling our own plan to self-government based on our Inherent Rights and Treaty relationship,” Delorme said in an earlier statement.

Before the signing, Trudeau, Moe and the assembled media watched First Nations men, women and children dressed in traditional garb performing age-old Indigenous dances that long predated the arrival of European settlers in what is now Canada.

Following the signing ceremony, Trudeau visited the nearby site of the Marieval school, which operated from 1899 to 1996-7, and spoke to some survivors. The school was run by a Catholic religious order.