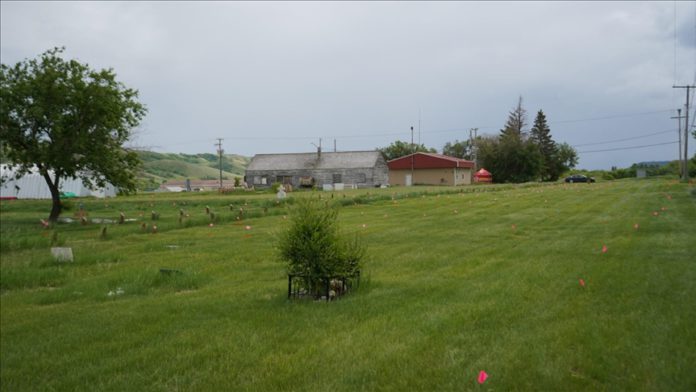 Trudeau’s apology comes after the latest discovery by the Cowessess First Nation of 751 unmarked graves at the former Marieval Indian residential school in the province of Saskatchewan. In May, the unmarked graves of 215 children were discovered by the Tk’emlups te Secwepemc First Nation at another school in British Columbia.

“To the members of the Cowessess community and Treaty Four communities, we are sorry,” the prime minister said. “It was something that we cannot undo in the past, but we can pledge ourselves every day to fix it in the present and into the future.” Treaty Four represents a historic treaty between Queen Victoria and some First Nation tribes.

Beginning in the 1820s, at the direction of the government, First Nations’ children were in some cases forcibly taken from families and put in various residential schools in a bid to instill in them European culture. It is believed that as many as 4,000 children died from disease and psychological, physical and sexual abuse. In a significant number of cases, parents never knew what happened to their children – they just disappeared.

There were around 140 schools set up across the country, with around 150,000 eventually attending. The last one closed in 1996. The schools were run by various religious groups including the Catholic Church.

“This was an incredibly harmful government policy that was Canada’s reality for many, many decades and Canadians today are horrified and ashamed of how our country behaved, from their culture and their language and forced assimilation upon them,” Trudeau said in a statement from his cottage in Ottawa.

In another development, the Catholic order, Missionary of Oblates of Mary Immaculate, which was in charge of 48 residential schools including the two where the unmarked graves were discovered in British Columbia and Saskatchewan, finally agreed to disclose historical documents relating to the schools. In all, the order ran 48 of them.

The order had previously kept the records secret.

“We remain deeply sorry for our involvement at residential schools and the harms they brought to Indigenous peoples and communities,” the order said in a statement on its website.

Trudeau and First Nations leaders have pressed Pope Francis to officially apologize for the Catholic Church’s involvement, but so far he has not responded.

Schools were also run by Anglican and United churches and they have issued formal apologies.