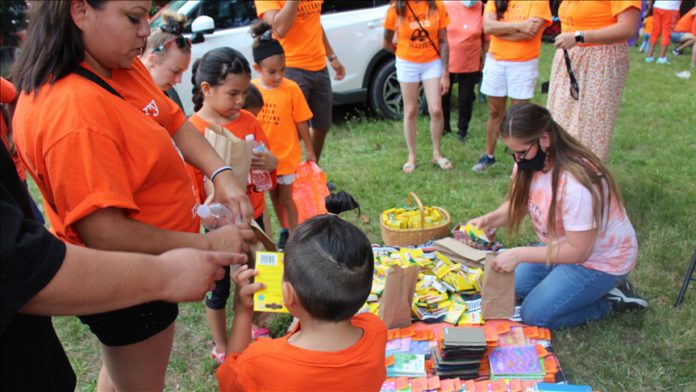 Ten young Canadian students have raised CAN$1,425 as of Tuesday toward their goal of CAN$2,150 to help survivors of a former Indian Residential School.

North Vancouver’s Sherwood Park Elementary students aged 5 to 10 will run, bike, swim, skate or paddle their way to 215 kilometers (134 miles) in sporting activities toward the goal of CAN$215 for each child.

One parent who helped organize the Gofundme campaign, Every Child Matters – Kms By Kids for Kids, said students were deeply saddened by 215 unmarked graves found at the former Kamloops Indian Residential School in late May. They wanted to do something to show they cared.

“We know there are still more children yet to be recovered and brought home, but we are choosing 215 as a symbolic number because of the recent discovery of the remains of 215 children at the Kamloops Residential School,” said Andriana Beauchemin. Her son, Varley, is a fundraiser participant.

Sherwood Park Elementary was built on Tk’emlups te Secwepemc First Nation land and there are many First Nation children attending the school.

“Our school has a lot of First Nations students and it’s on Tsleil-Waututh Nation land, so [the students] are really connected to the First Nations community,” said Beauchemin. “It really hit home, just how sad that discovery was.”

The money will go to the Indian Residential School Survivor Society, a group in the province of British Columbia that has provided services to survivors for the past two decades.

The discovery of the unmarked graves at Kamloops was the first of four lost cemeteries at former residential schools.

The latest discovery was Monday when it was revealed that 160 unmarked graves were located at the site of the former Kuper Island residential school by the Penelakut First Nation. That brings the total located to date at 1,308 at four former schools.

There were 139 residential schools in Canada, many run by the Catholic Church with the first opening in the 1820s.

Indigenous children were forced to attend as the government tried to eradicate their culture.

The last one closed in 1996. Many children were buried at the site of the schools.