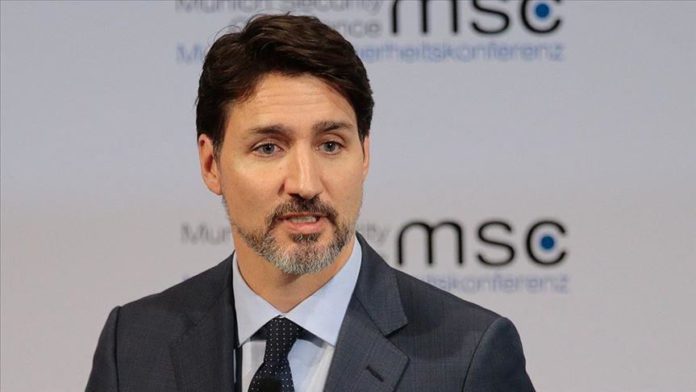 Canada launched a smartphone app Friday that will alert people when they come near someone who has tested positive for COVID-19.

Prime Minister Justin Trudeau described the app, called COVID Alert, as an “innovative” move that marks a new tool in the fight against the virus. It only works to identify COVID-19 positive people if they have the app.

“I’ve downloaded the app this morning and I encourage you to do the same,” he said, Friday, as use of the app is voluntary. “The more people who use it, the better it can trace, and therefore slow, the spread of the virus.

“In fact, health experts say that if enough people sign up, this app can help prevent future outbreaks of COVID-19 in Canada.”

The app was introduced Friday in Ontario, Canada’s most highly-populated province. It will be available in the other provinces and territories in the coming days.

The app uses Bluetooth technology to alert people when they come into proximity to others who also have the app. It works through cellphones.

When someone tests positive for the virus, health officials give them a code that is entered into the app. That code will notify others with the app if they have come into close contact with someone who has tested positive in the past 14 days. The app then tells them what course of action to take.

“We are talking about a voluntary approach here, and this is why we intend to, as much as possible, to put in place promotion around this…it’s the same thing as a mask or anything like that,” a federal official told reporters at a briefing session, Friday. “We want to make sure that people are very conscious about this opportunity that they have to bring another level of safety around their moves.”

Close contact is defined by the app as being in proximity to a positive person for at least 15 minutes and less than two meters apart.

And it allays privacy concerns by not collecting location, name or address, phone contacts or any health data.

“No one will know who you are or where you’ve been,” the federal government said in a video.

While a few countries are using a similar system, primarily those in Asia, EU counties have balked due to privacy concerns.

December 19, 2020
We use cookies to ensure that we give you the best experience on our website. If you continue to use this site we will assume that you are happy with it.Ok