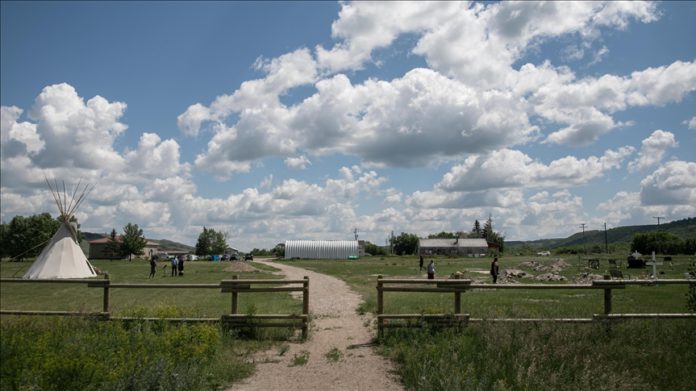 There are about 160 acres to search that may add to the 215 unmarked graves discovered in British Columbia at the former Kamloops Indian residential school, the Tk’emlups te Secwepemc First Nation said Thursday.

The first area searched was an apple orchard because a child’s rib bone was found there, Sarah Beaulieu, a specialist in ground radar at the University of Fraser Valley, said at a news conference.

She said the subsequent discovery of a child’s tooth in another area indicated a wider search was needed.

Chief Rosanne Casimir said tales about the school, which at one time was the largest in Canada with an enrollment of 500 in the 1950s, passed by word of mouth and that led to the finding of 215 unmarked graves in late May.

They were “carrying a burden of truth forward,” she said. “This is a heavy truth. It has been referred to as a historic dark chapter but Indigenous people are very much alive with the repercussions that they’re living today.”

There have been three other disclosures of unmarked graves at former Indian residential schools, bringing the total to 1,308 since the Kamloops discovery.

At one time, 139 schools operated in Canada. The first opened in the 1920s – and in total, about 150,000 lndigenous children were, if necessary, taken from their families and forced to attend.

The goal was to eradicated Indigenous culture and replace it with white culture. The last school closed in 1996. It is believed that 4,000 died from disease, malnutrition and abuse and were buried at the schools often without their parent’s knowledge. Many schools were run by religious orders.

Survivors of the Kamloops school also said they recalled children as young as 6 being rousted from their beds to dig graves in the apple orchard, said the chief.

Casimir demanded the release of attendance records from the federal government to help identify the children.

She also said the Oblates of Mary Immaculate, the Catholic order in charge of the school for decades, must release its records.

But the chief stressed the demand for disclosure and the search for bodies was not motivated by vengeance.

“We are not here for retaliation. We are here for truth-telling,” said Casimir. “We are mapping a way forward to bring peace to those missing children, their families and their communities.”