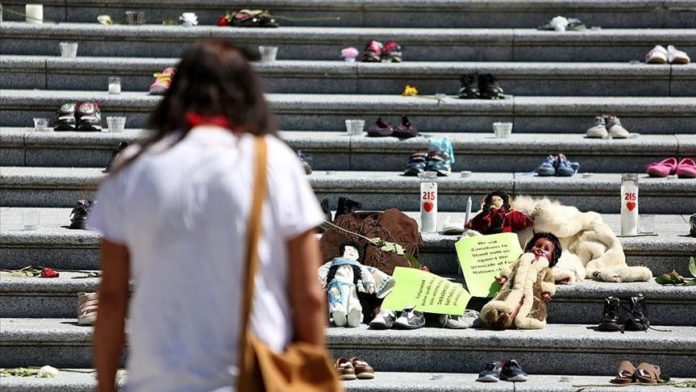 The Cowessess First Nation held a solemn vigil Saturday where 751 unmarked graves were discovered at the site of the former Marieval Indian Residential School.

A small gathering at the gravesites in the Canadian province of Saskatchewan placed 751 solar lights on individual graves.

The commemoration began with a traditional First Nation ceremony which involved the burning of one or more medicines gathered from the earth. The medicines are most often tobacco, sage, cedar, and sweetgrass.

The Marieval school was run by a Catholic order and earlier Saturday, two Catholic churches were burned to the ground on First Nations reserves in the province of British Columbia (B.C.) Police called the fires “suspicious.”

The blazes happened less than a week after two other Catholic churches were torched and destroyed, also on reserve land in B.C.

Indian residential schools were set up by the Canadian government beginning in the 1820s and First Nations children were taken from their parents, sometimes by force, and had to go to the schools and have their culture stamped out.

About 150,000 children went to 139 residential schools, where they were often subjected to physical, psychological and sexual abuse.

The schools were run by several Christian denominations, including Presbyterian, United, and Anglican churches. The Catholic church ran the lion’s share of the schools. The last school closed in 1996.

Many children were buried in unmarked graves and in some cases, parents never discovered what happened to their offspring.

While the other churches have apologized for their role in the schools, Pope Francis has not issued an apology despite being asked to do so by First Nations bands and others, including Prime Minister Justin Trudeau and Cowessess Chief Cadmus Delorme.

Roman Catholic Archbishop of Regina – a city in Saskatchewan – said Friday that a meeting between Indigenous leaders and the pope will take place before the end of the year.