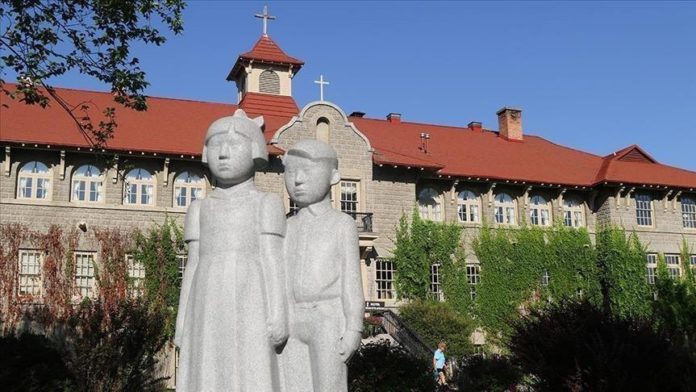 Fifty-four unmarked graves at two former Indian Residential Schools in the Canadian province of Saskatchewan has been located with ground-penetrating radar, the Keeseekookse First Nation said at a news conference Tuesday,

“A very solemn day,” said Keeseekookse Chief Lee Kitchemonia. “I think about all those children…gone to school and never returned.”

The graves were located at the sites of the Fort Pelly and St. Philip’s Residential Schools near Kamsack in Prairie province. Rumors about the graves had circulated for years in the Keeseekookse community.

“We are part of Canada’s darkest secret,” one elder said at the news conference.

About 150,000 Indigenous children from First Nations, Metis and Inuit peoples were taken from their homes, sometimes by force, from across Canada and made to attend 139 Indian Residential Schools, beginning in the 1820s. The last one closed in the 1990s.

The idea was to eradicate Indigenous culture. Many students were subjected to physical, mental and sexual abuse and tuberculosis was common. They were sometimes buried in unmarked graves. Some parents never saw their children after they were taken and had no idea of their fate.

About 4,500 students died at the 139 schools. New ground penetrating radar technology allowed the search for suspected unmarked gravesites at various locations in Canada.

In the past year, more than 1,800 graves have been located.

The St. Philip’s Residential School, operated by an arm of the Catholic Church, had a reputation for sexual abuse and brutality.

About 60% of the schools were run by the church and this year Indigenous delegations are to meet with Pope Francis at the Vatican.

They hope for an official apology from the pope for the church’s role in the horrors.

As more graves are uncovered, Chief Kitchemonia had a question: “Who is going to be accountable for this?”