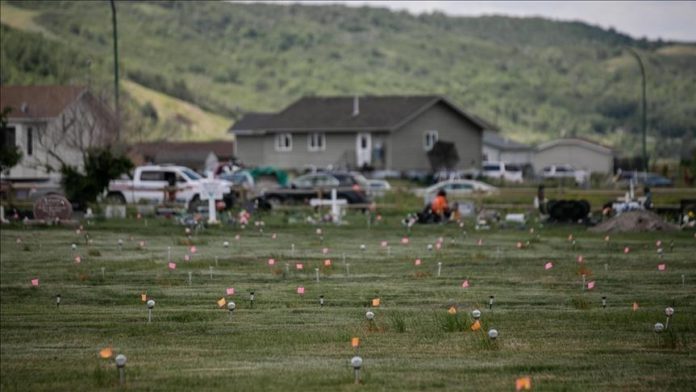 The Catholic Archbishop of Regina went to Cote First Nation in Saskatchewan to hear the stories of survivors of the former St. Philip’s Indian Residential School and he got an earful, Thursday.

Some survivors told Archbishop Donald Bolen the church had broken faith with them.

“The church is going to crumble,” one survivor said, as reported by the Canadian Broadcasting Corporation. “We don’t need the church. We need our culture.”

About 150,000 Indigenous children were taken from their families – by force if necessary – and put in residential schools beginning in the 1820s. The idea was to instill the “savages”, as the prime minister of the time described them back then, with white culture. About 4,000 died from disease, malnutrition and abuse before the last of 139 schools closed in 1996. Many were buried in unmarked graves – 1,308 have been located at four former residential schools since the end of May.

Cote First Nation elders asked the church to remove a plaque at the nearby St. Philip’s residential school, which operated from 1928 to 1969. The plaque was donated years ago by a deceased music teacher who stands accused of molesting around 70 children at the school. At its peak in 1964-65 St. Philip’s had an enrolment of 132.

Earlier this week the church complied with the elders’ wishes and Bolen said he would visit Cote First Nation, which lies about 170 miles northeast of Regina, the capital of the province of Saskatchewan.

The survivors demanded the church pay the $25 million that was promised to them back in 2005 as part of restitution for the abuse they suffered and also release all records pertaining to the residential schools.

And while Pope Francis has agreed to meet with Indigenous leaders at the Vatican in December, the survivors demanded the Pope come to Canada to apologize. About 60 percent of the schools were at one time run by Catholic Church organizations.

Bolen said he understands the pain of the survivors.

“We know the schools took you away from your families. We know you’re on a long healing journey. We want to walk with you and help in any way we can,” Bolen said. “Apologies are not an endpoint – they are a starting point.”