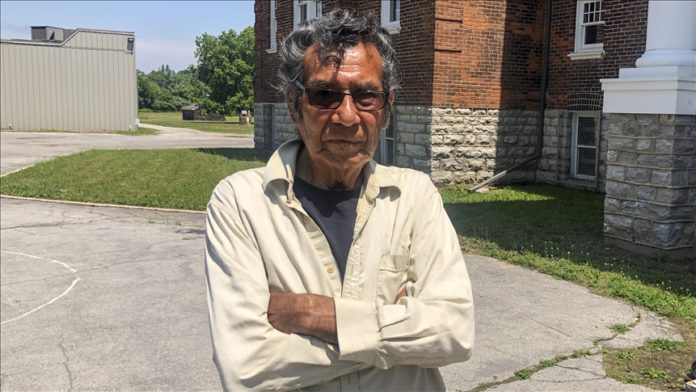 A residential school survivor in Canada urged justice for all children, citing hundreds of unmarked child graves in the gardens of former residential schools in two provinces of the country, which he said can be genocide.

Henry, a member of the Six Nations indigenous community, said he was six years old when he was taken to the school and until he left there at the age of 17, his brother and two sisters were also brought to the school.

He said his brother found a way to escape the school and never turned back, and he was not able to see his two sisters as well despite being in the same school.

In Canada, 139 residential schools, which were opened by the Catholic Church in the 1800s on behalf of the Canadian government and the last one of which was closed in 1997, became places where more than 150,000 indigenous children were forcibly taken from their families during the years they operated.

The Mohawk Institute residential school, which was opened in 1831 by the Catholic Church, is one of the largest in the country. It was closed in 1970 and its main building remains closed for renovation works.

The school has been serving as a cultural center since 1972 with three art galleries, a history museum, and a library in the building that was built later.

Noting that those 139 schools across the country were opened to collect indigenous children, Henry highlighted the reasons behind it, saying: “Just because of their nationality or just because of their language and culture, they took that away from us. And the belief.”

My family does not believe in the church, he said, adding that as native people they have their own way of belief.

“Just like, say you went to Africa, they have their own way of belief,” he elaborated.

Stating that he did not see any graves during his time at the school, Henry said there were always talks about unmarked graves at a farm located behind the school.

“We still are demanding this area to be searched with radar. All the grounds here and all the schools across Canada,” he said, adding that bodies of all those kids should be registered and funeral ceremonies should be held for each of them according to their belief.

Urging for justice for all the kids, Henry said those schools were like prisons for children, and added: “We did no crime. Just being native. I guess that’s our crime.”

He said that after all unmarked graves are detected and their funerals are held, Canada can be charged with genocide, noting that someone has to pay for the tragedies those kids went through in residential schools.

He stressed that apologizing was not enough.

Another member of the Six Nations indigenous community, Jacquline House, said she came to the school to offer prayers.

Speaking to Anadolu Agency, House said her father was also held there and she was deeply touched by recent news of unmarked graves found in British Columbia and Saskatchewan.

She said that after staying at that school for years, her father now cannot speak his own language and the kids were brainwashed there.

Citing it as a genocide, House said residential schools in Canada massacred children and urged perpetrators to account for their crimes.

Indian residential schools were set up by the Canadian government beginning in the 1820s and First Nations children were taken from their parents, sometimes by force, and had to go to the schools and have their culture stamped out.

About 150,000 children went to 139 residential schools, where they were often subjected to physical, psychological, and sexual abuse.

Canadians reacted with horror when almost 1,000 unmarked graves were discovered in June at former residential school sites in British Columbia and Saskatchewan. The goal of the schools was to stamp out the native culture and instill a white culture in the children.

About 4,000 children died and were buried, sometimes without markers, and their families were not told what happened to them.

* Contributions and writing by Sena Guler in Ankara