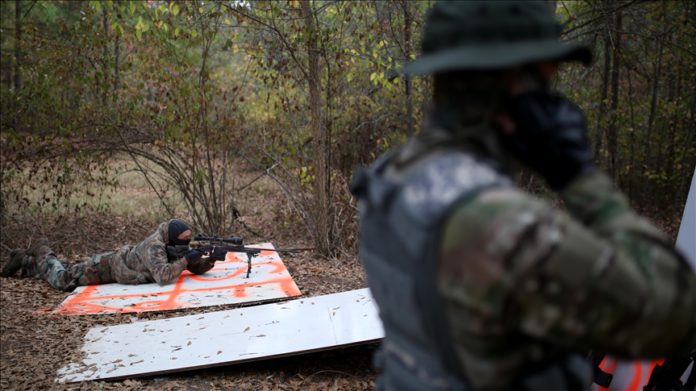 Canada added three more white extremist groups to its terrorist list Friday, including the Three Percenters, an organization that has a history of attacking Muslims.

The Aryan Strikeforce and an American neo-Nazi group were also put on the list. The additions were announced by Canada Public Safety Minister Bill Blair.

The Three Percenters were suspected of trying to kidnap the governor of the US state of Michigan and members also engaged in training in the Canadian provinces of British Columbia and Alberta, Blair said.

Mustafa Farooq, chief executive officer of the National Council of Canadian Muslims (NCCM), said Friday he knows all too well the background of the Three Percenters.

“The Three Percenters used to train a few hours away from where I grew up in Edmonton, Alberta,” Farooq said in a statement obtained by Anadolu Agency. “They trained with live ammunition, assault weapons, built bombs, and had a history of bombing masjid and attacking rallies.”

Farooq said expanding the terrorist list was the right move particularly with a national summit on Islamophobia set for the end of July.

“For over a year, and especially in the aftermath of the IMO (International Muslim Organization) and London terror attacks, we’ve been urging for immediate action to put an end to the most dangerous Islamophobic supremacist groups in Canada,” he said. “In the lead up to the National Action Summit on Islamophobia, the federal government took an important step today through listing one of Canada’s most dangerous white supremacist groups as a listed entity through the Criminal Code.”

Five members of a Muslim family out for a stroll were deliberately run down by a truck in June – a nine-year-old was the only survivor. In another attack, a Muslim was stabbed to death while sitting outside the IMO in Toronto last September.

Blair said something had to be done to counter the growth of white supremacist groups.

An organization connected to Daesh in the Democratic Republic of Congo was also added to the list.

Groups designated as terrorist organizations can have their assets seized and be charged with serious criminal penalties, said CTV News.

Proud Boys were linked to the mob that stormed on Jan. 6 the American Capitol building that includes both House and Senate offices.