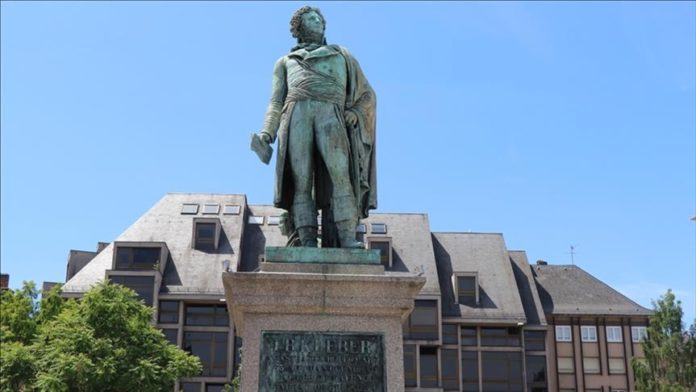 Egyptian engineer Ihsan Muharram launched a local and international campaign to retrieve the skull and remains of a young Kurdish scholar who killed the occupying French colonial commander in Egypt during the Napoleon Bonaparte era.

Muharram wants Suleiman al-Halabi’s remains buried in an honorable manner worthy of him.

Despite good relations between the French administration and the Egyptian government, has not taken an initiative to recover al-Halabi’s remains from the Museum of Man in Paris.

Al-Halabi was born in 1777 in the village of Kukan within the borders of Afrin, Syria. According to French sources, he hails from the Evs Qubar Kurdish family.

He was sent to Mecca and Medina, and then to Egypt in 1797, by his father, Mohammed Emin, a butter and olive oil merchant, to learn Islamic theology.

Al-Halabi, who enrolled in the Al-Azhar institution in Cairo, started to work as a calligrapher in addition to his studies.

Returning to his village in Syria at the beginning of 1800 after completing his education, al-Halabi went to Palestine to visit Masjid al-Aqsa.

Al-Halabi, whose path crossed with two Ottoman intelligence officers in Jerusalem, was given the task of assassinating Gen. Jean-Baptiste Kleber.

The 23-year-old scholar accepted the task and returned to Cairo 20 days later by joining a trade caravan and planned the assassination.

Explaining the assassination to four Syrian scholars in the courtyard of the mosque where he was staying, al-Halabi told the scholars who tried to dissuade him: “No, this enough, I’ll finish it now.”

According to the interrogation of al-Halabi, he got a dagger from Giza to kill Kleber and monitored the general’s palace for one month.

Kleber died immediately and the engineer died a few days after the assassination.

Al-Halabi, who escaped by burying the dagger, was later found by French soldiers in his hiding place.

‘I was sent by the Janissaries’

According to interrogation records of French colonial police, al-Halabi, who was identified by the engineer, was arrested and imprisoned with four people who were aware of the assassination.

He confessed to the assassination after being tortured and said he was commissioned by the Agha of the Ottoman Janissary to kill Kleber, who inflicted great losses on Ottoman armies.

The colonial administration ruled impalement for al-Halabi and beheading for the other four scholars.

Al-Halabi, who was impaled alive after burning his hand, died after four hours of suffering as a French soldier who felt pity for him gave him water to drink and he died swiftly.

Less than a year after Kleber’s assassination, French forces in Egypt were forced to withdraw.

French doctor, Dominique Jean Larry, who witnessed the execution, said in a book in 1803, that the young man did not give up his proud stance until his death.

Al-Halabi’s skull is displayed in a museum in France.

Egyptian writer Alfred Farag noted al-Halabi in a play in 1965 and his name was given to a neighborhood in Aleppo.

Occupation forces transferred al-Halabi’s skull and his dagger to France, where the dagger is still on display in a museum in Carcassonne as a witness to his bravery to this day. His skull is displayed in the Human Museum in Paris under “the skull of a criminal” — evidence of the brutality of the occupation.

A statue of the general was also erected in Strasbourg and part of his remains were placed under it, while the city’s Archeology Museum houses an art painting depicting the assassination.