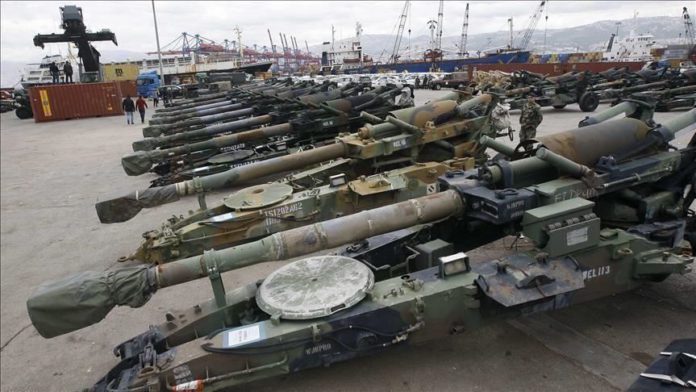 A UK-based anti-arms sales group said it is challenging the legality of the UK government’s decision to renew arms sales to Saudi Arabia in court on Tuesday.

The Campaign Against Arms Trade (CAAT) said in a statement that it has filed a new judicial review application into the decision.

The application by CAAT came after the government’s decision to renew arm sales to Saudi Arabia in July.

But in July 2020, the British government resumed the sales to Saudi Arabia after a review by the Department of International Trade, which said any violations by the Saudi-led coalition in Yemen were “isolated incidents”.

The government review has been challenged by civil and human rights groups as “hundreds of attacks on residential areas, schools, hospitals, civilian gatherings, and agricultural land and facilities have been documented.”

According to CAAT, the UK has “licensed at least £5.4 billion ($7 billion) worth of arms sales to Saudi Arabia since bombing of Yemen began in March 2015, the real total will be far higher.”

Since 2015, the UK has issued Saudi-led coalition £2.7 billion worth of ML10 licenses, which allows sales of aircraft, helicopters, and drones and £2.5 billion worth of ML4 licenses for sales of grenades, bombs, missiles, and countermeasures, CAAT said.

“In reality the figures are likely to be a great deal higher, with most bombs and missiles being licensed via the opaque and secretive Open License system,” it said.

“The UK’s biggest arms company, BAE Systems, has made £15 billion in revenue from services and sales to Saudi Arabia since 2015.”

“Tens of thousands of people have been killed in this brutal bombardment, yet arms companies have profited every step of the way,” Andrew Smith of Campaign Against Arms Trade said.

He said: “These arms sales have only fuelled the destruction and prolonged the conflict.

“Last year the Court of Appeal found that the government had acted illegally, and nothing that we have seen since suggests otherwise.

“The government may think that the widespread destruction of schools, hospitals and homes can be dismissed as ‘isolated incidents’ but we do not. These arms sales are immoral, and we are confident that the Court will confirm that the decision to renew them was illegal.“